Cooking with solar power is a fantastic concept. But how does it play out in real life? Is cooking with the sun a viable option for campers?

So, let’s dive into the idea of cooking with sunlight!

What Is Solar Cooking?

Solar cooking is using the power of the sun to heat or cook food and liquid. This is actually not a new idea. Cooking with the sun’s energy has been around for centuries. In fact, the first solar oven was created in the 18th century by a guy named Horace-Bénédict de Saussure.

In theory, you can cook or heat food wherever the sun is shining. But in reality, there are a few caveats.

Let’s take a look at how solar cookers work.

How Does a Solar Cooker Work?

Simply stated, a solar cooker allows sunlight to be concentrated in the cooking area by using a reflective surface.

The more sunlight is present and reflected, the more energy/power is provided to the cooking surface.

With this parabolic solar cooker, the sun’s rays are reflected off of the surface of the dome and onto the pot of food being cooked.

To give you a reference in terms of power, when sunlight is concentrated on a 1 square meter surface, that surface holds about 1,000 watts of solar energy.

With a solar cooker, the reflective surface concentrates the power of the sun onto the cooking surface, thus producing adequate energy to heat or cook food or liquid.

Are There Different Types of Solar Cookers?

There are a number of different types of solar cookers with the most common being the solar box cookers that work by trapping heat/energy in an insulated box or compartment.

But solar cookers come in various types, sizes, and shapes, all of which serve to concentrate the sun in the location of the cooking surface.

Let’s take a look at several different types of solar cookers and how they work.

A solar box cooker, sometimes referred to as a solar oven, is perhaps the most widely used type of solar cooker on the market. Many believe it’s also the most successful in terms of cooking ability.

The idea behind a solar box cooker is to capture the energy of the sun inside the box where the food (and the pot or pan) absorb it. Some solar cookers have an insulated cooking chamber. The purpose of this is to keep heat from escaping and to further concentrate the sunlight-generated heat onto the food.

Solar box cookers are essentially solar ovens that can cook or bake food over a fairly long duration of time.

The most common/traditional types of solar cookers have been the solar oven, panel cooker, and parabolic solar cooker. (Photo credit: One Earth Designs)

A solar panel cooker is a means of cooking with solar panels while using reflectors (and dishes) to concentrate the solar energy onto a particular point on the bottom of a pot. Very high temperatures are possible, though this generally depends on the size of the reflector.

Solar panel cookers are capable of cooking food in roughly the same amount of time as a conventional oven. The downside, however, is that they’re relatively challenging to make and need to be rotated constantly to follow the focus of the sun. They’re also capable of causing eye injuries and burns if not used properly because they focus the sunlight onto a very small surface.

A parabolic solar cooker also concentrates sunlight onto a small surface area where a pot or pan can be exposed to high temperatures. In this way, it can be used in a similar manner to a conventional stove.

Parabolic solar cookers are generally used for boiling or frying because they don’t have an insulated cooking chamber.

Food could also be extended over the small, very hot area on a stick – a hot dog or shish kabob, for example.

Solar steamers are actually a form of parabolic solar cooker. With a solar steamer, the heat generated from the sun boils water to create the steam that cooks the food, similar to a pressure cooker.

Solar steamers are also sometimes used to sterilize dirty water to make it safe for drinking.

A vacuum tube solar cooker (also called a vacuated tube solar collector – we’ll show you one below) is essentially a vacuum-seal between two layers of glass. This type of cooker reduces the heat loss while cooking the food placed inside the tube.

It’s possible to cook food using solar cooker on partly cloudy days, but the process will take much longer. Solar cookers are designed to use concentrated sunlight to cook the food.

Most solar cookers are designed to work as the concentrated light from the sun strikes the food or pan, making the sun the focal point of the cooking process, and a necessary part of the success of solar cooking.

That said, it’s possible to cook with solar on partly cloudy days, but the process requires far more time.

Reflectors help to increase the effectiveness of a solar cooker to concentrate more light onto a precise focal point, but (again) at least partial sun is still important.

Reflectors can be made of aluminum foil, stainless steel, mirrors, polished aluminum, even Reflectix – basically any reflective surface (though smoother, shinier ones are, of course, more effective).

What Are the Pros and Cons of Solar Cooking?

While harnessing the power of the sun to bring energy to the process of cooking is a great idea, there are a number of advantages and disadvantages of solar cooking.

Can a Solar Oven Boil Water?

A solar oven absolutely can boil water if sufficient sun is available. Some types of solar ovens take longer than others to boil water, but the greatest determinant of the time required to boil water with any type of solar cooker is the amount of sunlight available in that time and place.

It’s possible to boil water using solar cookers. The amount of direct sunlight available will determine the time it takes to boil the water.

How Hot Does a Solar Oven Get?

The answer to this question depends on the type of solar oven and the degree of sunlight involved, but some solar ovens will reach 400° F.

Most solar cookers/ovens reach anywhere from 200° F to 350° F, temperatures that are capable of cooking most foods. Cooking at lower temperatures, of course, requires more time.

What Can Be Cooked Using Solar Cooking?

Almost anything can be cooked using solar cooking but the time and amount of sun required is always at issue.

But, in the right conditions, solar cookers can also sterilize and pasteurize!

Yes. Because of the fact that solar cooking uses lower heat, vitamins, proteins, and other nutrients are less likely to break down as they do when high-heat cooking methods are used.

Food cooked with a solar cooker is healthy.

The carcinogens often produced with high-heat methods of cooking (like grilling) are also absent with solar cooking.

Cooking with solar does use radiation, but it’s infrared radiation, (the element of the sun that carries heat), and (other than the risk of burns) is harmless.

How Much Do Solar Ovens Cost?

The cost of a solar oven or solar cooker varies greatly depending on the type of solar oven purchased.

To give you a bit of a cost reference point, here are a few of the more popular choices of solar ovens on the market today: 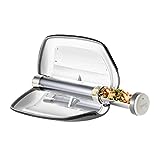 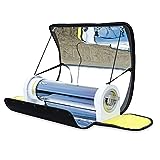 You may have seen our post on folding camp grills, and if you caught our post on how we rigged up a BBQ grill connection to our RV’s propane tank, you may also have noticed that we cook outside regularly with our propane grill. Now it might be time for us to check out the option of cooking with the sun!

Have You Cooked with a Solar Cooker

If you’ve used a solar cooker of any type, drop us a comment to let us know how it worked out for you and which type of solar cooker you used!