The name “Winnebago” is to “RV” as “Kleenex” is to “tissue” and “Q-tip” is to “cotton swab”. That’s a rare level of brand recognition where a company or product name is so well recognized that it can be used interchangeably with the actual name of the item. Some of that comes from being around for a long time, or even first-to-market.

In some cases, a brand name can even replace the name of the item itself in common usage. For example, when’s the last time you asked someone for the “cellophane tape”? We all say “Scotch” tape instead, which is of course the brand. We’ve heard lots of people, especially non-RVers, refer to just about any RV (especially a motorhome) as a “Winnebago” so that brand has obviously reached a rarified status!

We featured the Minnie Winnie 26T in our post on 7 of the best Class C RVs under 30 feet.

But in today’s post, we’re taking a close-up look at a different model of a Minnie Winnie and all it has to offer, especially to traveling families.

The Minnie Winnie is one most popular RV models ever produced by Winnebago Industries.

The now-iconic model really hit the sweet spot for many travelers and has held the interest and support of RVers for four decades.

The Winnebago Minnie Winnie debuted in 1973 and its standard features were versatile enough to attract RVers who travel solo, as couples, and as families.

As we write this, the 2023 Minnie Winnie is available to consumers in five floorplans. They’re built on the Ford E350 and E450 chassis. 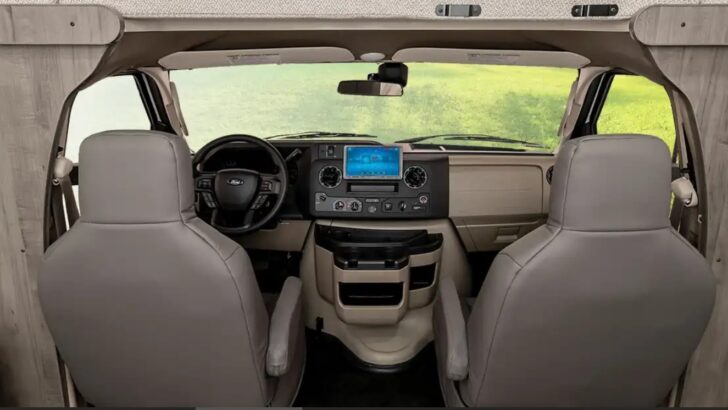 But first, a hat tip to the company whose brand name is often interchangeable with the term “RV” itself: Winnebago Industries.

Back in the 1950s, a company called Modernistic Industries in California broke ground with a 15-foot travel trailer known as “Aljo”. The cost to buy one? A whopping $895!

A funeral home manager and part-time entrepreneur named John Hanson was living in Forest City, Iowa, a place that was barren in terms of employment and prosperity.

Hanson loved traveling and camping in his family’s Aljo, so he opened a travel trailer dealership in Forest City which sits in Winnebago County.

In 1960, Modernistic Industries became Winnebago Industries, named after a river that runs through Forest City and the county in which Forest City sits.

The first fully self-contained Winnebago motorhome left the factory in 1966 with the “Flying W” painted on the rig. It was priced significantly lower than the competition but was made with innovation and quality. It had a serial number of 001. (It’s widely reported to have continued running well into the 21st century.) 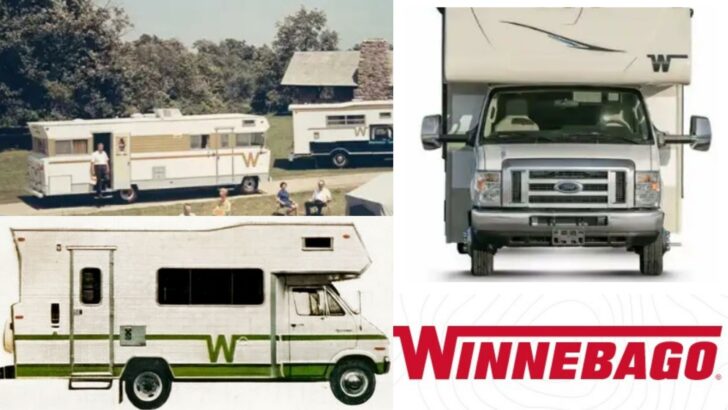 The iconic “Flying W” has become synonymous with Winnebago over more than five decades.

Winnebago is now a leading manufacturer of outdoor lifestyle products and offers Class A, B, and C motorhomes as well as travel trailers, 5th wheels, and boats.

The 2023 Minnie Winnie 31H is built on the Ford E450 Chassis with a 350-hp 7.3L V8 Premium Engine. It has a TorqShift 6-speed automatic transmission with overdrive and a 210-amp alternator.

All that power nicely carries a well-thought-out living space with two slide-outs for ample room.

The Minnie Winnie 31H really does sleep 8 people, and even up to 10… especially if some of them are kids, of course! 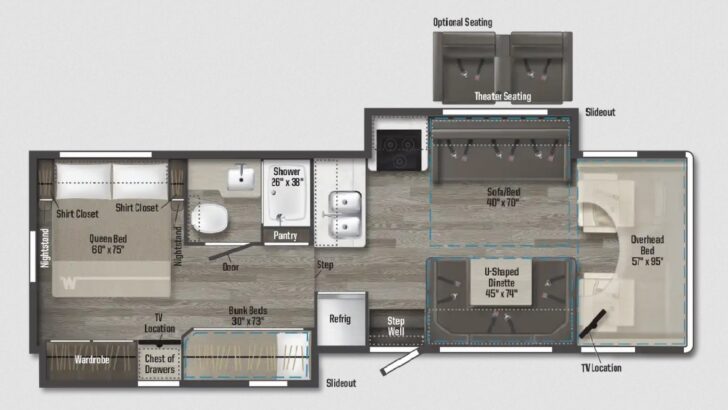 The floor plan of the 2023 Winnebago Minnie Winnie 31H.

Besides the driver and co-pilot seats up front, the sofa and dinette have three seatbelts each. Theatre seating is an option in lieu of the sofa, which would leave two theatre seats, so only two seatbelts in that area instead of three.

If you’ve been doing the math, you can see that there are a maximum of 8 seating positions with seat belts. That means you can legally only drive with 8 on board. But the flexibility of the sleeping arrangements can allow you to invite some guests over for the night, so you really could sleep ten people on board!

Holding tank capacities are as follows:

The water heater has a 6-gallon tank, and the LP (liquid propane) tank has a 76.14 lb capacity.

The Minnie Winnie 31H has a 55-gallon fuel tank and runs on gasoline.

The Minnie Winnie is truly an iconic model from an iconic brand.

Hi Diane. Good question... making RV beds can be a challenge for two people (tight spaces!!), let alone doing it alone! We feel for you. Not sure if these would help, but you might want to check out "Beddys"... they're a fitted sheet with the rest zippered to it, so that it's like a full bed set. Here's a link that might help explain them: https://beddys.com/pages/what-are-beddys-bed-sets

They're not cheap, but it could be worth the money if it makes the task easier! Hope it helps!

We had a 2014 Minnie Winnie 31KP. The layout was very good, and the build quality was top notch. We miss it sometimes, but like the additional room and bath and a half of our current gasser class A.

Wow ... That's downright horrible! I have had a Winnebago for many many years. Great Company, and Great products, but they really dropped the ball on this one. I have a 2001 Winnebago Minnie Winnie 27P that is Soooooo much better. E-450 chassis with a Trition V10 Engine. HWH jack system. Two slides. When I watched that info-commercial, it could have been in a hospital room. More inside storage and TONS more storage in the outside basement area, nothing unique there. How about a a outside entertainment system with a shelf that can hold a TV. How do you fit a Grill in a bay that's 24 inches high, or any type of tools, or water hoses, or sewer accessories. My Winnie may be a lot older, but I have a Fireplace inside, Dual love-seat couch with middle storage, a LARGE pantry, (2) two TV's with built in DVD player, a dedicated drinking water filter and spigot on the sink, and so much more!

Don't know what they are charging for that unit, but I am keeping mine!

After reading your article I was expecting 4 bunks. A set of bunk beds is 2 so 2 sets would be 4! An edit is in order. Thanks.

Another awesome story! Like many traveling and RV enthusiasts, I know what a Minnie Winnie is. IMHO, it's the best looking motorhome with the Winnebago name on it.