How to Replace an RV Plumbing Vent (and Upgrade It!)

Adequate air circulation is an essential part of the design of an RV. Most RVs have several rooftop openings and items that are dedicated to the proper movement of air. At least one of these openings on every RV is an RV plumbing vent.

That’s right, not all of the vents on the roof of an RV are for keeping you, the occupants, cool and comfortable when you’re INSIDE the RV. Sure, some of them are… like the vent in your kitchen or bathroom. But others are dedicated to venting your RV’s plumbing. That’s right… your RV’s plumbing needs air, too!

So, in today’s post, we’re taking a brief look at the humble RV plumbing vent – what it does, why it’s necessary, and how to replace it (and even improve it)!

What is an RV Plumbing Vent?

In most RVs, there’s at least one pipe running from the top of the gray and black waste tanks through the roof of the RV. These are the RV plumbing vent pipes, and their purpose is to allow tank odors to be vented to the outside and to help ensure that air can enter/exit the tanks when the volume of their contents changes (like when flushing the toilet, taking a shower, or dumping the waste holding tanks). Without these vent pipes, the odors from your gray and black tanks could accumulate inside the RV, creating a most unpleasant atmosphere.

Depending on how your RV manufacturer plumbed it, your RV may have a single plumbing vent: where a single opening through the roof joins the vent pipes that come from both the black and gray tanks.

Alternatively, you could have multiple RV plumbing vents penetrating your RV’s roof, like we do, with one pipe coming from each tank to its own dedicated vent.

Either way, RV plumbing vent pipes are critical to the proper functioning of your RV’s plumbing and waste tanks. And, even more important, at the top of each vent pipe sits an RV plumbing vent cap which is attached to the roof and sealed.

Are There Different Types of Plumbing Vents for RVs?

Yes, there are different types of RV plumbing vents. And not all are equal. For instance, our RV came from the factory with the traditional kind of vent cap that’s pretty standard with most, if not all, RVs. Here’s what the average RV plumbing vent cap looks like:

But these traditional plumbing vent caps create no airflow whatsoever. Instead, they simply cover the vent pipes to prevent leaves and other debris from entering (or clogging) the pipe.

And in some situations, these standard RV plumbing vent caps can actually CAUSE a problem because they can direct airflow (i.e., when driving) DOWN into the vent pipe instead of up and out. When that happens, odors from your black/gray waste tanks can be forced back through the plumbing, finding their way out into the living area of your RV. 🤢

For this reason, our personal favorite RV plumbing vent cap – the one that has worked best for us since we upgraded to this type of vent in 2014 – is the 360 Siphon vent. They come in black and white, and we’ve tested them over time and (many) full waste tanks, and they’ve served us exceptionally well. We’ll get into this in more detail shortly, but for now, here’s the newest version of vents we’re referring to: 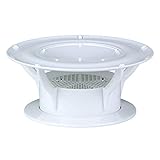 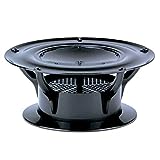 Does My RV’s Plumbing Need to be Vented?

If your RV is equipped with a plumbing system, it does indeed need at least one plumbing vent. The vents allow odors and sewer gases to vent to the outside of the RV. These vents are installed slightly above the roofline so that any breeze/wind carries off the gases and odors. And again, this applies not only to the black tank but also to the gray tank.

The gray tank contents are a concentrated (especially after a long boondocking trip) combination of water, soaps, food particles, and body oils that form a pungent liquid when combined together.

When an RVer notices a very foul smell inside the RV, it’s natural to think it must be coming from the black tank. But very frequently, what they’re smelling is an odor from the gray tank. And trust us, after a long stay off the grid, the high ratio of particles and substances other than water that form this nasty brew can make gray water smell worse than black water.

Why Should I Replace My RV Plumbing Vent?

RV plumbing vents don’t often need to be replaced, but there are a couple of situations that would call for their replacement.

The first is age. With age comes wear and tear, damage from the sun or from low-hanging tree branches, etc. RV plumbing vents get old and can crack or break. The Dicor lap sealant around the vent can also get old and crack, allowing water to seep into the RV and cause hidden (and severe) problems with water damage.

The second reason to replace your RV plumbing vent is if you’re noticing foul odors inside your RV, either when parked or when you’re driving down the road. Again, the 360 Siphon vent is the best product we’ve found for addressing odor issues related to the RV plumbing vent.

The design of the 360 Siphon creates a zone of negative pressure above the vent pipe, pulling air up and out of the vents so that even when you’re parked, the slightest breeze can draw tanks odors up and out of the RV. In addition, they’re made of polycarbonate, so they’re very strong and durable.

How to Replace an RV Plumbing Vent

If you need (or want) to replace your RV’s plumbing vents, you’ll probably need up to an hour or so, along with the following few tools, to complete this easy DIY project: 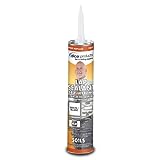 Please Note: the following instructions are from our original installation using the first generation of 360 Siphon Vent. The current version includes different instructions that require less disassembly of the old, existing vent (i.e. easier!). However, if you’d like to completely remove the old vent for a cleaner installation, these instructions are still accurate.

We recommend watching the video of us installing our 360 Siphon vents. This video includes the details of our testing process, where we determined that the vents were working as advertised. The video embedded here was made in 2014, and our 360s have been performing well for us ever since. The newest version of the 360 Siphon vent looks a little different, but they install and perform the same way.

What Are the Other Vents on My RV Roof?

In addition to the vents for your RV plumbing, you’re likely to have other vents on your roof that contribute to proper air circulation throughout your RV.

Depending on the size of your RV, you could have multiple air vents that open and close, some with a fan. For instance, you may have a vent in your bathroom (unrelated to the plumbing vent) that opens to allow air in and out of the bathroom, helping to control the buildup of moisture/humidity when showering, etc. (We recommend installing a roof vent cover if you don’t already have one.)

Similarly, you may have a vent in the area of your galley/kitchen to help remove odors from cooking.

Any of these vents could have a powered fan, like our Fantastic Vent Fans. Operating at various user-controlled speeds, they not only vent out humidity and odors, but they can pull fresh air through open windows/doors, helping to maintain a comfortable temperature in the RV, without running the air conditioning.

Some models of vent fans are reversible, allowing you to pull air out of the RV, or draw fresh air in. And others have a remote control so you can operate them from wherever you’re sitting. Usually, an open and running vent fan, in combination with an open window, creates a nice cooling breeze throughout the RV’s living space.

RV plumbing vents aren’t often thought about, but if you ever have an issue with odor in your RV, they’ll quickly come to mind.

If you have issues with odors when your RV is parked, or when it’s moving down the road, consider replacing your RV plumbing vents with 360 Siphon vents. And as always, be sure to check everything on your RV roof regularly, to make sure that nothing is cracked or damaged, and that the Dicor sealant around all vents and other items hasn’t aged beyond its usefulness for keeping leaks at bay.

6 Comments
Newest
Oldest
Inline Feedbacks
View all comments
Sometimes we receive products for evaluation at no cost and may use affiliate links to the products and services from which we earn commissions. For example, as an Amazon Associate, we earn from qualifying purchases. That said, it's important to us to let you know that our opinions are our own. We only recommend products we believe deliver real value and that we can confidently recommend without reservation. You also won’t pay an extra penny by using our links. Thanks so much for supporting RVgeeks as we work to create helpful RVing-related content that we hope enhances your RVing life!

How to Hook Up to an RV External Propane Connection

Read More
No, you shouldn’t smell your RV toilet. That’s not normal. While an RV toilet doesn’t work in quite…
Read More

Read More
If you’re a new RVer, or haven’t even taken delivery of your first rig yet, the connections and…
Read More

Read More
Besides telling you about our newbie mistake, we have an LED contest winner to announce! Someone just won…
Read More

Read More
Have you thought about RV Boondocking, but haven’t been able to “Cut The Cord” yet? Worried that you’re…
Read More