With gas prices affecting RVers’ travel plans, everyone’s thinking about the benefits of smaller RVs. We here in North America tend to think of a small rig as a Class B or even a Class B Plus RV. But, friends we’ve gotta tell you – a Class B RV is nowhere near the smallest camper van. There are RVs out there that are significantly shorter than a Toyota Corolla, and the Japanese van conversion company Oka Motors says they can sleep three humans!

Yup, you read that right. We said “significantly shorter than a Corolla” and we also said “sleeps three”. And no, we weren’t kidding.

Let’s take a look at a little RV that actually may qualify as the smallest camper van on Earth.

What Is the Suzuki Every?

The Suzuki Every is where the smallest camper van began. It’s a little van made in Japan and designed for personal use. It’s 11.12 feet in length. When you compare this with the Toyota Corolla (15.2 feet long), you can see that’s a pretty significant difference. 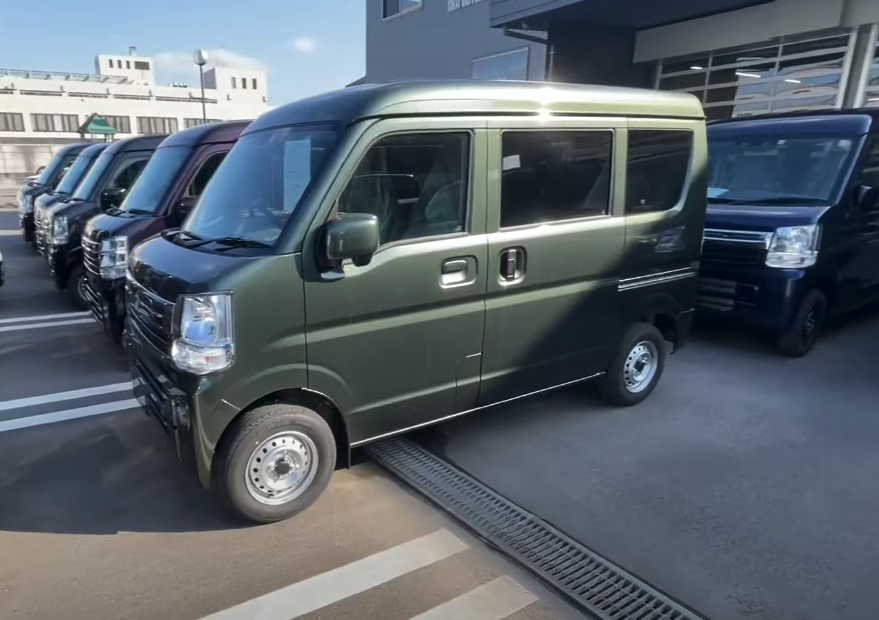 Now we ask you: Do you think you could sleep three people (or even two people) in a van that’s 4 inches shorter than the Toyota Corolla?

That’s what Oka Motors claims is possible with the Miniature Cruise Cozy.

What Is the Miniature Cruise Cozy?

The Miniature Cruise Cozy is the Suzuki Every converted into a little camper van by conversion company Oka Motors. 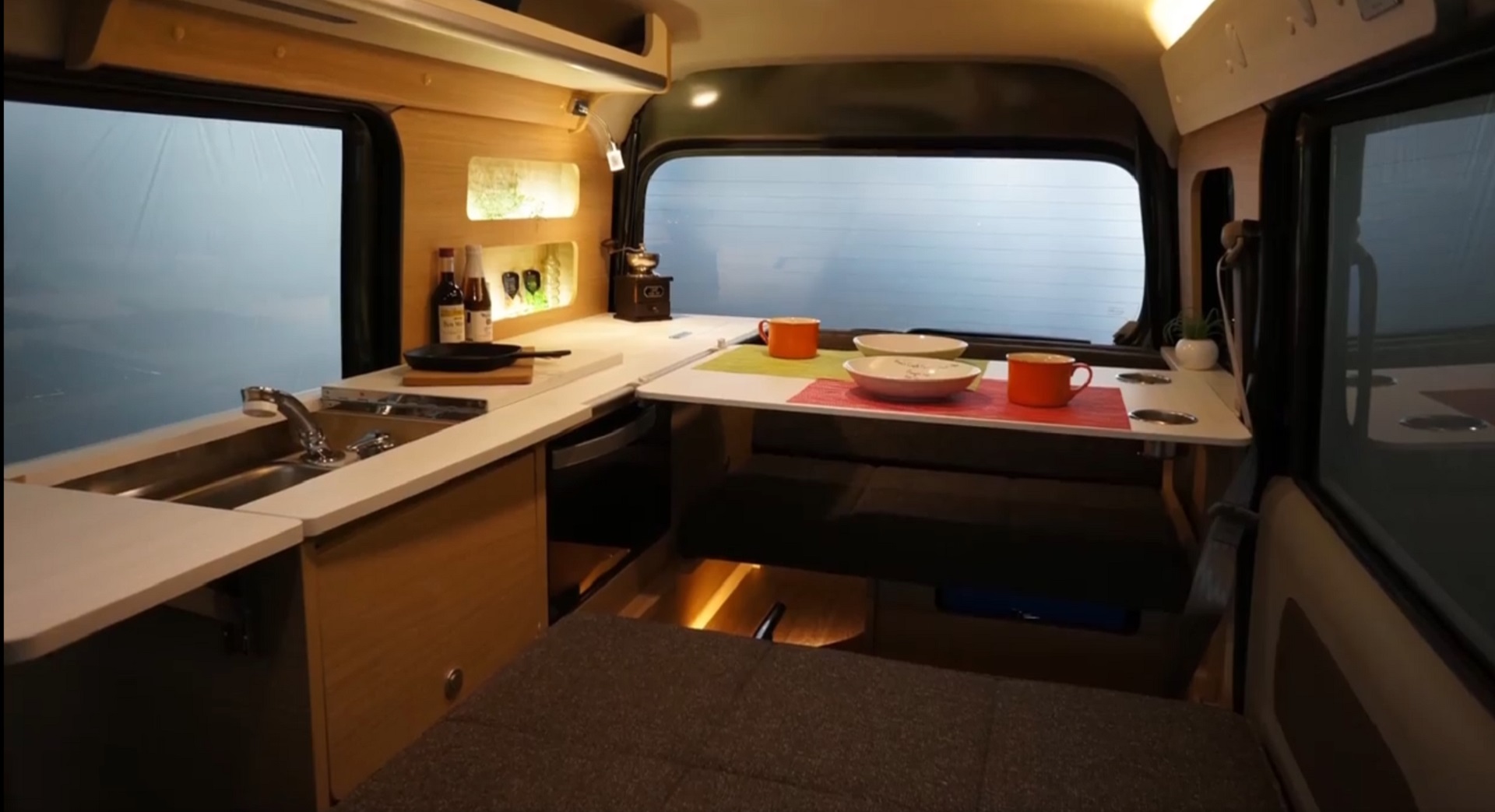 This is the interior of the tiny Cruise Cozy, a camper van conversion by Oka Motors, built on the Suzuki Every. (Photo credit: Oka Motors, Japan)

So, Oka took the Suzuki Every (all 11.12 feet of it) and created a little RV, currently known as one of the smallest camper vans on Earth.

Does the Smallest Camper Van Have a Kitchen?

Indeed, it does! Along the driver’s side of the vehicle (which is on the right-hand side of the van – remember, this van is made for Japanese drivers), there’s a long counter. 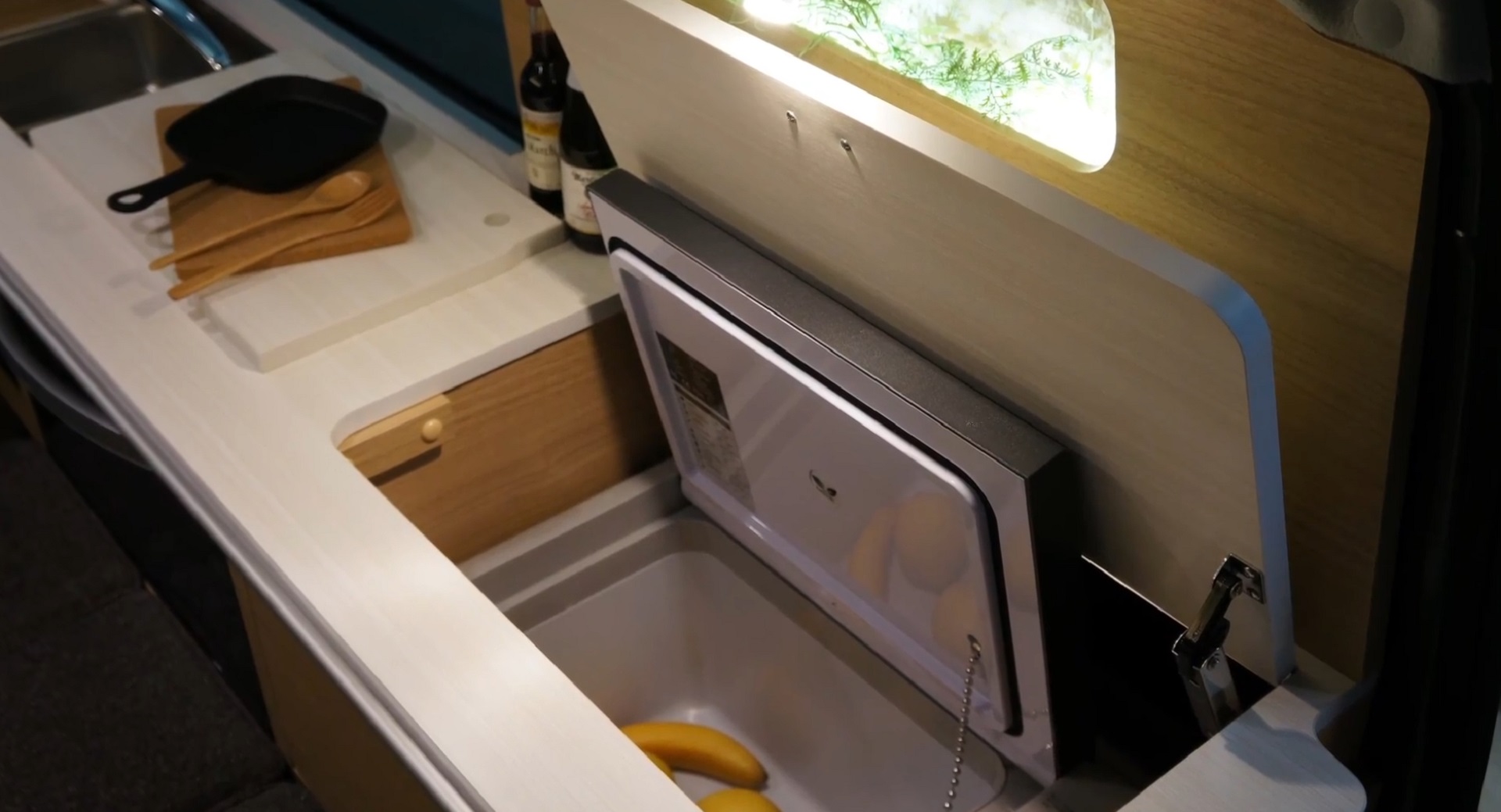 This little 12V fridge sits down under the counter but is on a sliding rail that enables the fridge to slide out through the rear of the van for access from outside. (Photo credit: Oka Motors, Japan)

In the center of the counter is a sink, a microwave, and a 12V cooler on a sliding drawer that allows it to be accessed from the rear of the van as well as from the interior. There’s also a little propane stove with a single burner.

This sink converts into a counter – and…..something else! (Photo credit: Oka Motors, Japan)

But you won’t believe what else the kitchen counter does. More on that in just a minute.

Does the Miniature Cruise Cozy Have a Dining Table?

Believe it or not, the answer to this question is ALSO yes. There’s a little table with a couple of cup holders built into it. The table sits on a rail allowing it to move back and forth along the kitchen counter. 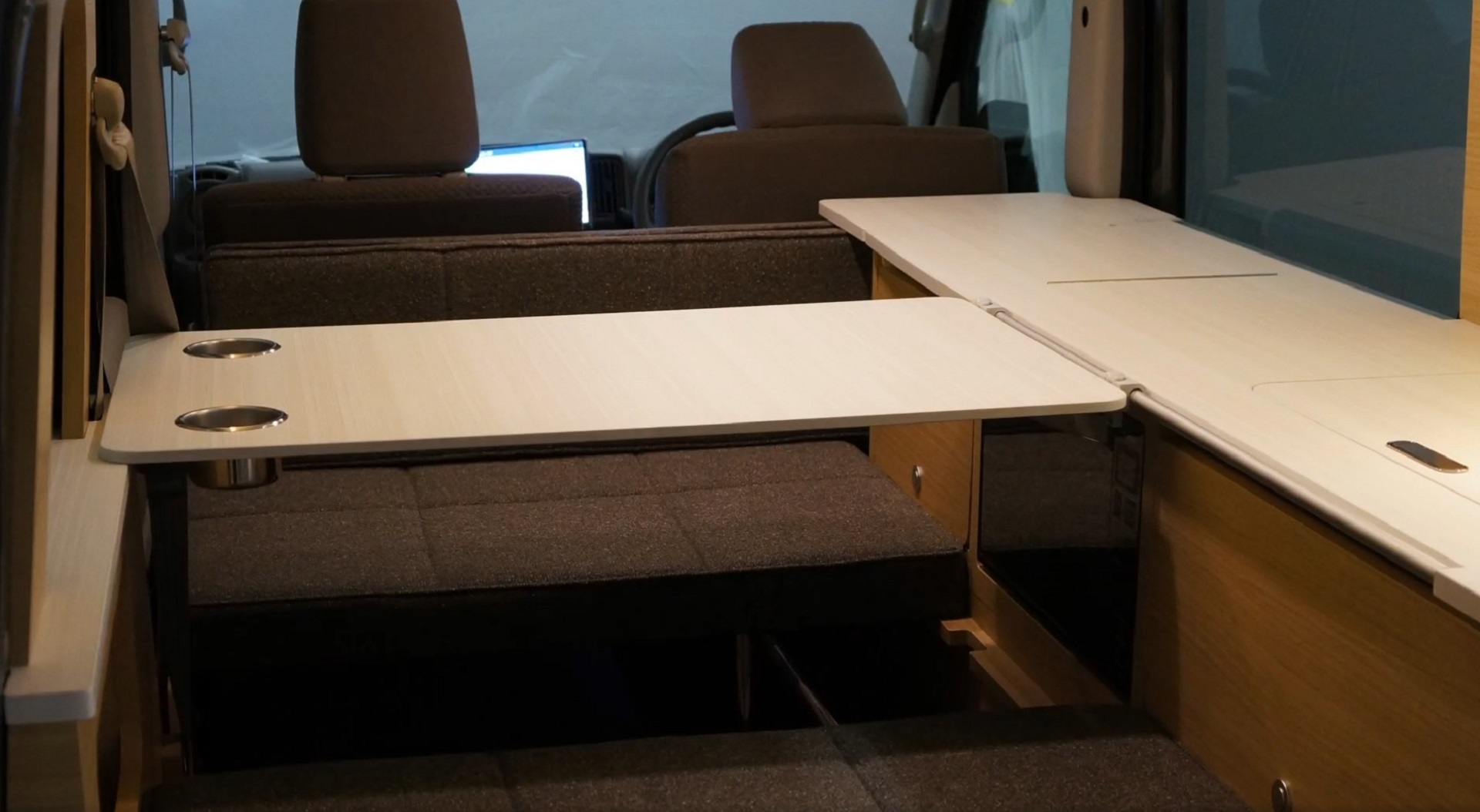 This is the dining table that sits on a rail allowing it to be moved back and forth along the kitchen counter. (Photo credit: Oka Motors, Japan)

The table can be popped off the rail and used outside at the back of the van with the hatch lifted.

Does the Cruise Cozy Have a Pop Top?

Believe it or not, the answer to THIS question is NO! Unlike many other very small RVs, the Oka Miniature Cruise Cozy manages to squeeze in all of its features WITHOUT expanding (up OR out) with a pop-up section.

What About A Bathroom?

Unfortunately, as far as we’ve been able to determine, the Oka Miniature doesn’t offer an option for a toilet. This is somewhat understandable, as there are definitely limits to how many features you can cram into an RV this tiny. Which may limit this particular RV’s usefulness on longer RV trips, without bringing along your own portable toilet.

But, when it’s time for a shower, you CAN pull the kitchen sink sprayer out through the driver’s side sliding door so that you can use it for a supply of water as you bathe.

How Many People Can Sleep in the Smallest Camper Van?

So, this brings us back to that long kitchen counter on the driver’s side of the van.

On the passenger’s side of the van, there’s a sofa. With a middle cushion removed, you have face-to-face seating for two (with the little dinette table between them if you wish). And with the cushion in place, you’ve got your little sofa. You move the front seats forward, and the little sofa, with the adjustment of the cushions, becomes what Oka Motors considers a bed for two. 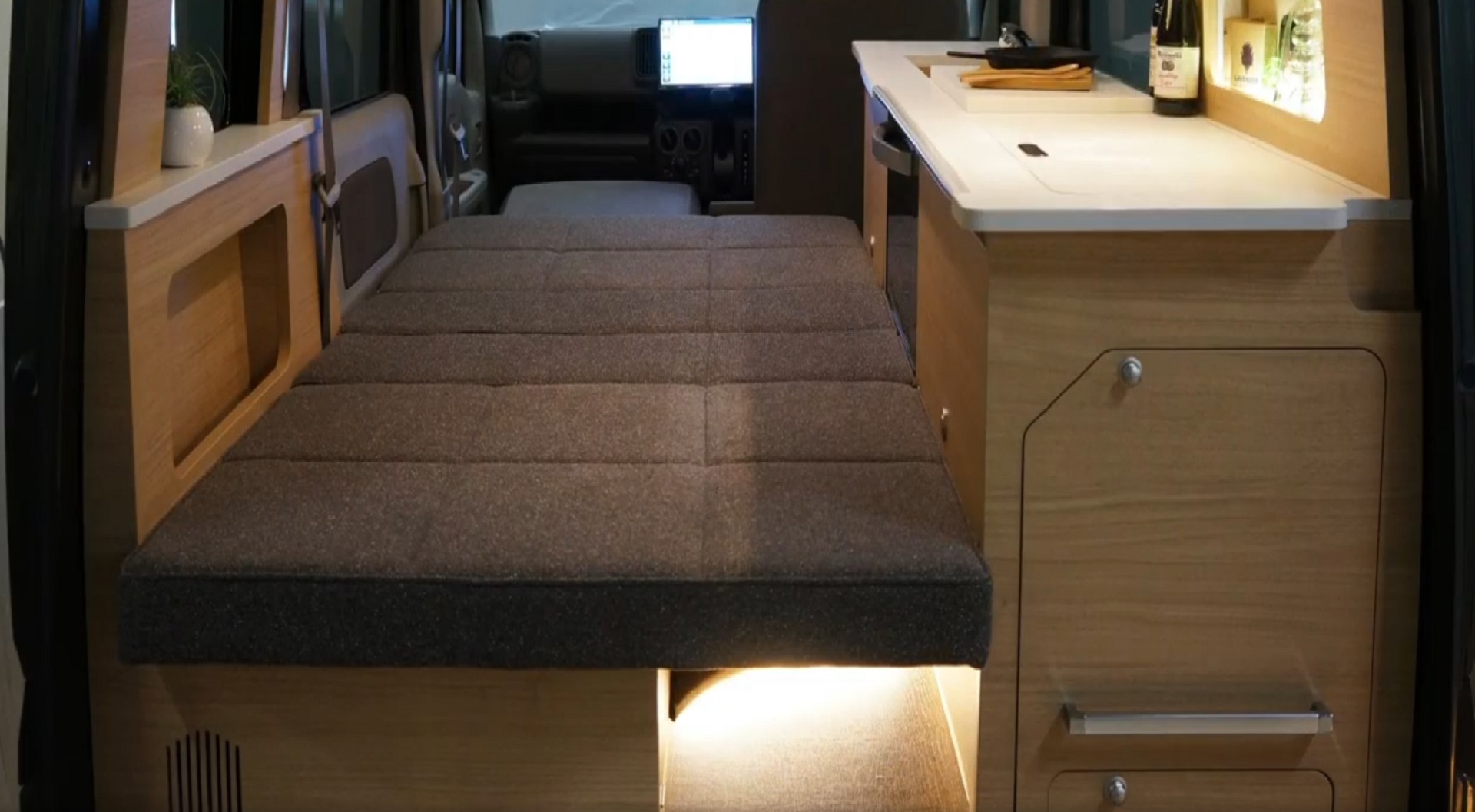 And that long kitchen counter becomes a bunk bed. In an emergency. And a dire one at that. No, but seriously – the tiny “double” bed made by folding out the little sofa, and the kitchen counter bunk bed, are supposed to make room for three sleeping humans. 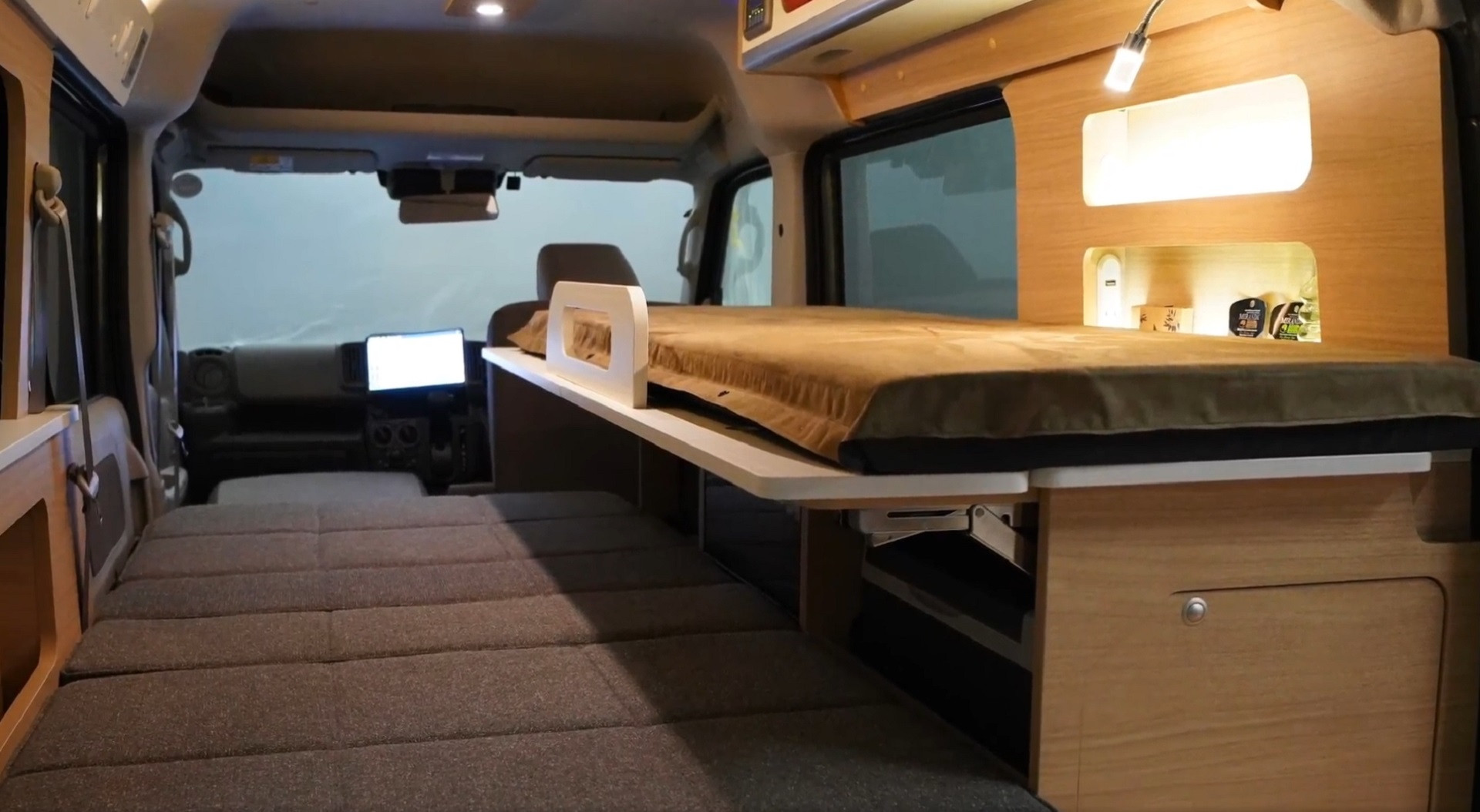 Here you see that the kitchen counter has become a bed for a second or third (fairly small) person. (Photo credit: Oka Motors, Japan)

Does the Miniature Cruise Cozy Have an Off-Grid Power System?

The lights and electronics are powered by a couple of 85-amp-hour batteries and a 1,500-watt inverter.

Does the Smallest Camper Van Come With 4WD?

The Miniature Cruise Cozy does come in a 4WD version! So you can take your smallest friend(s) and head out into the backcountry for some super tightly-knit camping.

We’re not absolutely sure it’s the world’s smallest camper. There are lots of micro campers outside of North America, and some of them are amazingly small. And in fact, a number of them are made by Oka Motors.

But this is the smallest one we’ve heard of to date.

How Much Does the Miniature Cruise Cozy Cost?

It appears that the cost of the Miniature Cruise Cozy or the newly remodeled Miniature Comfort Cozy is around $28,275 USD. 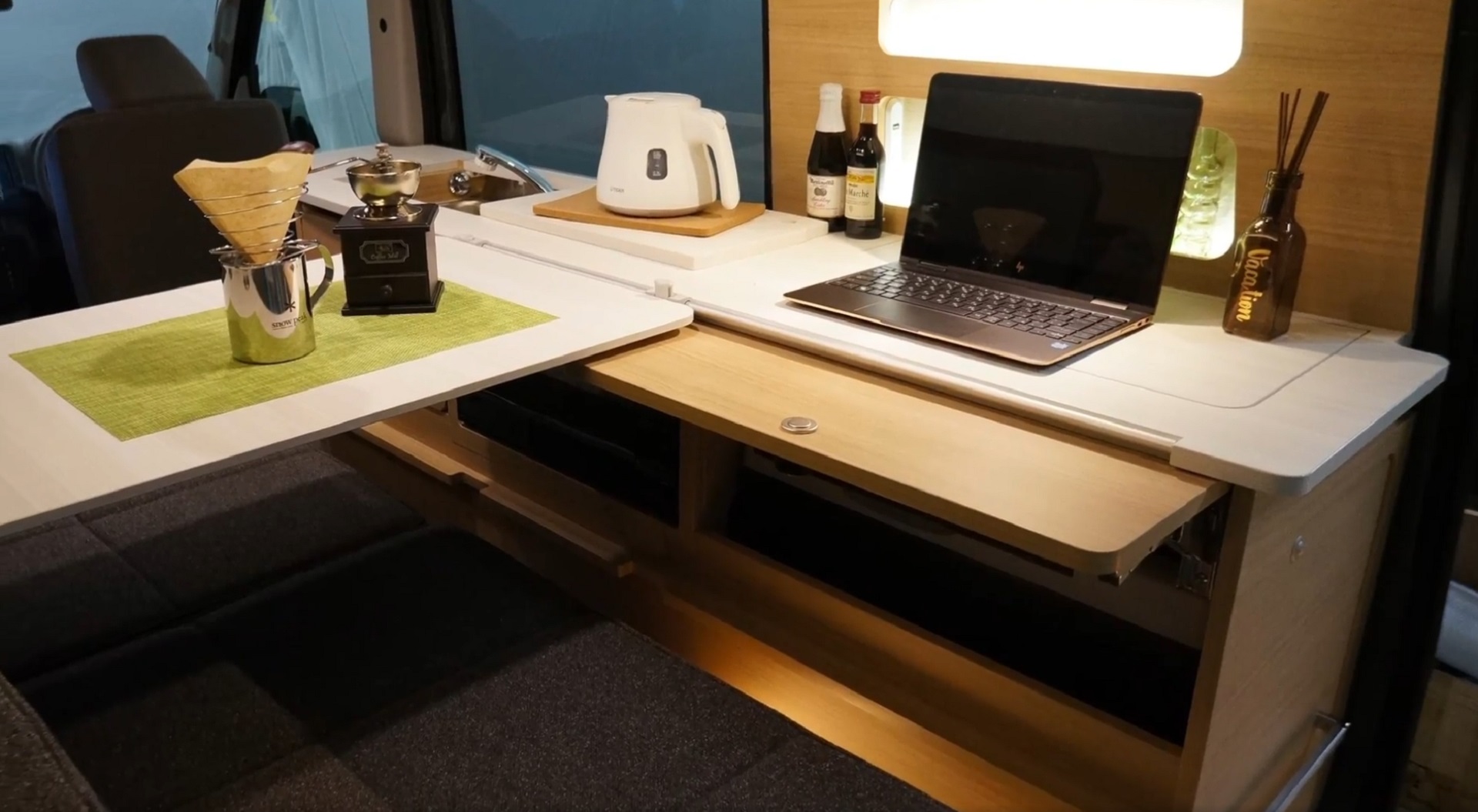 Here’s the Cruise Cozy all set up for working and dining. (Photo credit: Oka Motors, Japan)

And yes – that includes the van itself as well as the complete conversion (though not the costs for transporting and importing this cozy little RV to North America).

Is the Miniature Cruise Cozy Available in North America?

We’ll let you guess how well an 11-foot micro camper would go over in North America, but no – it’s not currently available for sale here. 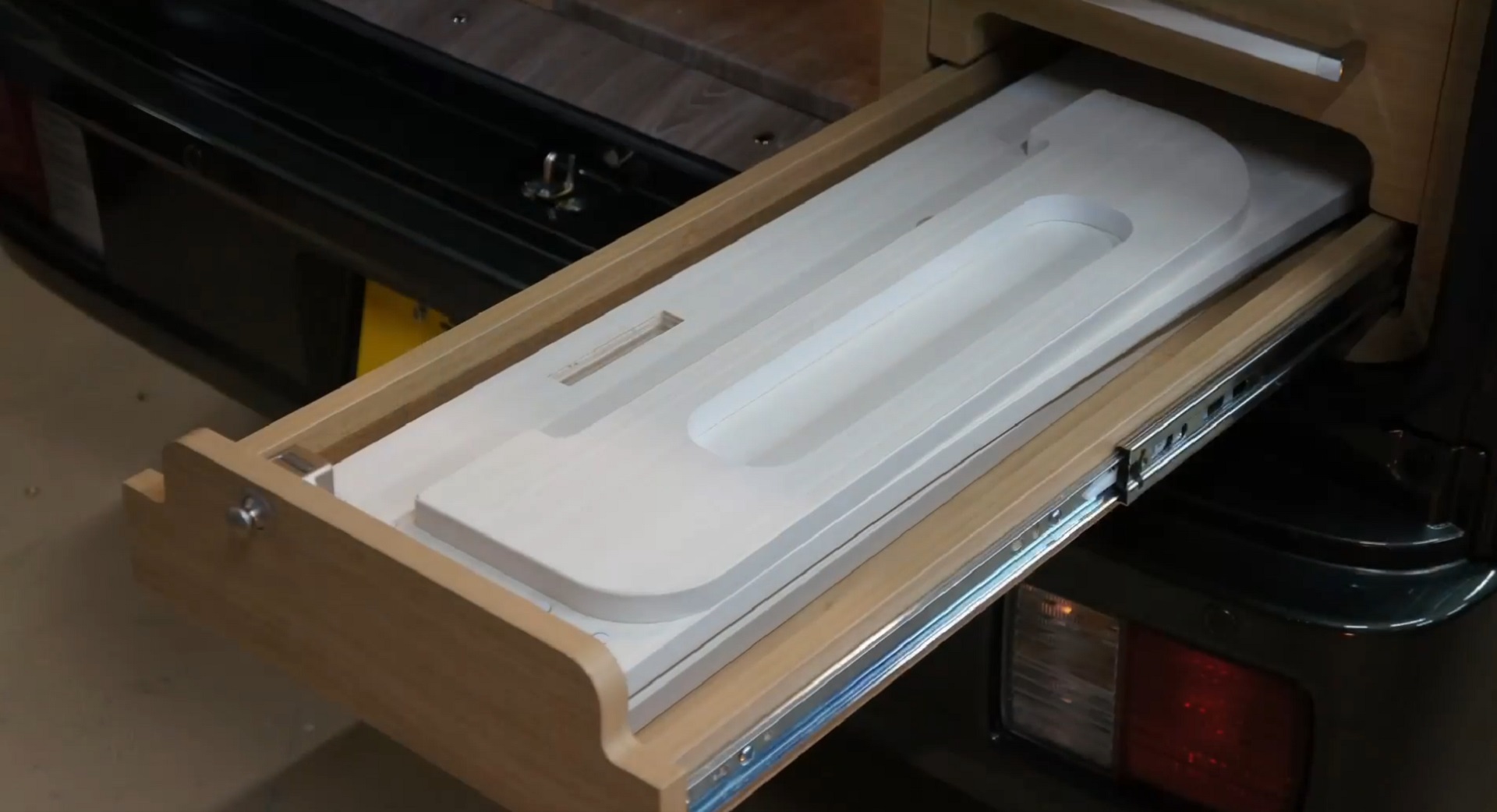 Here are the pieces that convert the counter into a bed, stored compactly in a drawer of the camper van. (Photo credit: Oka Motors, Japan)

Could You RV in the Oka Miniature Cruise Cozy?

Geek Out With Us Every Week

How hard is it to buy a vehicle in Japan or Europe and bring it to mainland US? Anyone here who has tried it?

Unfortunately, due to the extremely small size of this unit, there isn't any option for a toilet (that we've been able to find). So you'd need to add your own portable toilet to it to make it more functional away from amenities. You CAN, however, pull the kitchen sink sprayer out through the side sliding door to use as an outdoor shower... so there's that! 😉

I can certainly agree with your comments on this van sleeping three. After reading the size I thought you were going to say "one adult and two dogs".

One fact about any RV's where need you to break down a kitchen to make a bedroom is that the hassle factor very quickly becomes a major annoyance.