We’ve posted many times in the past on various topics related to RV solar panels. We’ve produced a number of related YouTube videos and have discussed our own ultimate RV solar panel system detailing how we roll with our solar power system. But today we’re talking about a literal solar-powered RV. And by that, we mean an RV that runs completely on solar power… engine, and all!

Have we come that far with solar? Is there an RV with enough solar power to run everything that requires electricity IN our rigs and the rig itself?? Or even partially power the rig with solar energy like a hybrid vehicle?

Let’s take a look at the possibilities!

What Do We Mean By a “Solar Powered RV”?

Typically when we discuss solar-powered RVs on this blog, we’re referring to an RV solar system that allows us to power the appliances and devices in an RV when we’re not plugged into shore power.

This could be a single 100 watt solar panel, a small charge controller, and one or two batteries to store (a relatively insignificant amount of) power that’s sufficient to get an RVer through a weekend: powering the rig’s lights, water pump, and recharging devices such as laptops, phones, and tablets.

It could also be a larger system that runs anywhere from 200 watts to a 1,300 watt system like ours with a couple of charge controllers, hardware, and a large lithium battery bank (like our Xantrex lithium battery, or maybe a bank of Battle Born batteries) that’ll run all of an RV’s 120V AC appliances, air conditioners included.

But that’s not what we’re talking about in this post!

With today’s topic, what we mean when we use the term “solar-powered RV” is a motorized RV that is completely powered by the sun, meaning that the RV itself is an electric vehicle so its engine runs on battery power and its battery is recharged using solar power.

In addition, everything inside the rig runs off the same battery(ies) and solar system as well.

So, the sun (via the solar panels and charge controller) recharges the battery(ies) that run the rig’s appliances AND the RV itself!

This would be a great option because we could travel as far as we wanted without worrying about getting to a charging station before our “EV RV” needs recharging!

Is There an RV With an Engine that’s Powered By the Sun?

As it turns out, there is! And there are more are rolling out.

Here we want to give a hat tip to some bright young students with the vision, energy, and drive to make a fully self-sustainable RV a reality.

A team of students from the Eindhoven University of Technology in the Netherlands created a phenomenal little RV known as “Stella Vita” that runs entirely on power generated through solar panels mounted to its roof.

The students designed an extremely lightweight and aerodynamic, self-sustaining motorhome to generate sufficient solar energy to sustain their daily living needs… AND to drive the rig!

When Stella Vita reaches its camping destination, the roof can be raised. This offers standing height for the motorhome’s residents and allows additional solar panels to be deployed, doubling the solar surface to a maximum of 17.5 sq. ft. 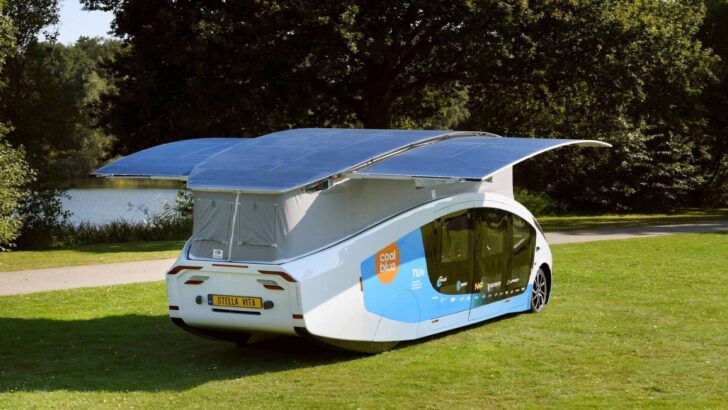 Given sufficient exposure to the sun, Stella Vita can drive right around 450 miles, which should be sufficient for a day’s RV travel.

In September of 2021, the students hit the road to put Stella Vita to the test on a road trip through Europe. The results were fantastic!

They traveled from Eindhoven University in the Netherlands all the way to the southern tip of Spain, a total of 1,242 miles, without stopping to charge the camper!

These 22 bright, determined, innovative young students accomplished a significant goal that may herald a time when we, too, can also drive an RV powered only by the sun.

Are There Any Other Solar Powered Electric RVs?

As a matter of fact, a fully electric RV is no longer a pie-in-the-sky idea. There are varying degrees of solar campers on the market, including self-sustaining solar rigs.

Their biggest drawback at this point, of course, is price.

And right here in North America, creators and manufacturers are hard at work to ensure that all-electric RVs are coming.

However, in addition to being expensive, those currently on the market offer a limited driving range before they need to be recharged, so that’s still a far cry from what the students from Eindhoven University pulled off.

Thor’s Vision Vehicle will take you about 300 miles before needing a recharge, so it’s certainly not a fully solar-powered RV, but it delivers some North American possibilities for the future. 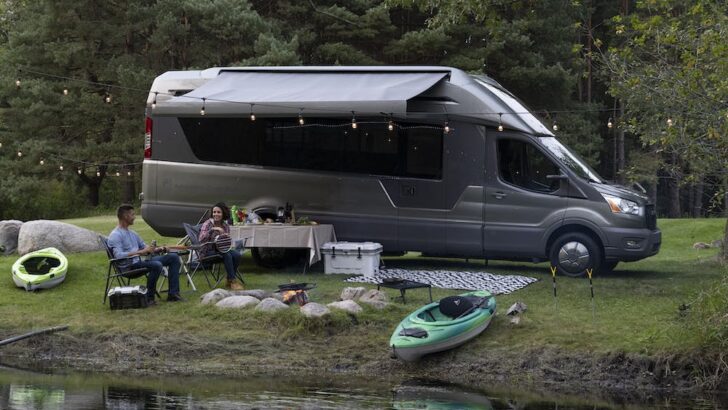 Thor’s Vision Vehicle will take you 300 miles before it needs a recharge. Maybe Thor should call the kids from Eindhoven University for some tips on making the Vision Vehicle fully self-sustainable! (Image credit: Thor Industries)

Would You Have an Interest in a Fully Self-Sustainable Solar Powered RV?

What are your thoughts about fully solar-powered RVs? Would you be interested in owning one? Would you have concerns about it, such as a worry about multiple days without sun, for example? Other concerns?

Subscribe to our daily newsletter! We’ve been full-time RVers for 20 years (!) and share everything we’ve learned about RVing in our daily blog posts. Join our online community to receive a wealth of great RVing knowledge delivered right to your inbox.

Whether this is your first time on the road or you’re a seasoned full-timer, you’ll love the wide range of RVing topics we cover. Don’t miss a single article or any of our famous RV gear Giveaways — Subscribe today!

while it would be great to have a fully solar powered rig, that’s a big ask. We have 2280 watts of panels on the roof and four 300 Ah lithium batteries on the roof of our rig (doesn’t leave much room up there when combined with the three heat pumps, vents and skylights.) with this setup though we are power independent of pedestals, generator or engine most of the time. We can run two of three a/c units mid-afternoon into the evening in 95 degree weather. Even with a solar roof like we have, if it hits 105 degrees outside we can’t keep it cool, but we can move to avoid that weather much of the time. It isn’t cheap, but it does make possible boondocking for long periods during the Spring, Summer and Fall when there is good sun. Right now in the shorter gray days of winter, not so much! Our limiting factors are the gray water and water tanks, but even with a daily navy shower we can go at least ten days. It works for us. I don’t know if we will see fully solar powered Motorhomes for 10-15 years, but that’s ok. Let’s focus on the low hanging fruit first! My first hope is that there will be towable EVs available. We have a class A Toyhauler with a gas pump on board. I dream of that being a charging port one day.

I like the idea of a solar powered RV. Whether those solar panels are on the roof or wherever they can be installed.

Next summer, when it’s very hot, see what the available electrical power is from the grid as the EV’s plug in. It’s going to get very ugly.

Those of us with large RV’s think we are in a marginal camp site if it only has 30 amp power available. But as we know, that is adequate 95% of the time. But now translate that to stored battery power from 4PM on each day and we would quickly find that the RV life style that we are used to is no longer possible. Big screen TV’s, electric refrigerators, electric hot water heaters, electric space heaters, electric coffee pots, toasters, crock pots, unlimited lighting, outdoor mood lighting, and on and on, all gone. Are we willing to give that up just to say we are all solar? I don’t thinks so. Those that do spend a lot of time boon docking, still have a generator that is relied on often. So are todays “normal” RV’ers ready for 100% solar rigs? I think the answer is a clear “No”.

If this sounds familiar, it was made into a movie starring one of the Belushi boys, Halle Berry, and a bunch of high schoolers from Hawaii, I believe. They called their solar powered car the cockroach. Got to love it when art imitates life or vice versa, in this case.

How funny! We'll have to check it out!

From what I’ve seen, the EV RVs currently being designed in the US will also charge the batteries when plugged in at the RV resort - and this will become a major problem. Much like super charging multiple Teslas can compromise a residential power grid, one or more EV RVs sucking that much juice will either overload the campground’s electrical system and/or drive up their electrical bill. The last RV resort I went to already had notices not to charge your EV car. I am in favor of going EV, but I have serious doubts today’s power grids can handle the EV revolution.

True, David. The (aging) electrical grid is definitely going to need some bolstering and upgrading to handle the increased demand for power! 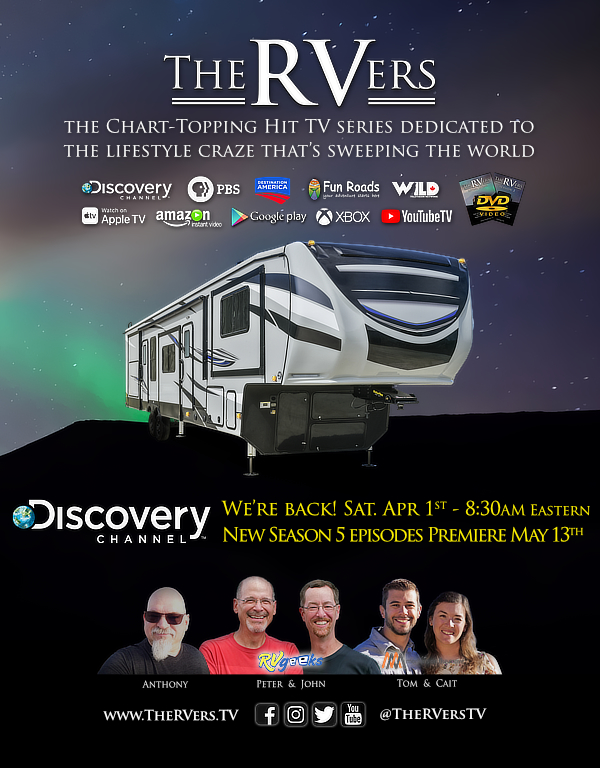