Having landed on this page, you may already know who the RVgeeks are. We’re Peter Knize & John Sullivan, and since 2011 we’ve co-hosted The RVgeeks, one of YouTube’s most popular channels about RVing. That’s why in 2019 when we had a chance to make the big leap to broadcast television as co-hosts and Co-Executive Producers of the TV series The RVers, we grabbed it with gusto!

On the site you’re reading now we post regularly about all things RVing, with a focus on DIY maintenance, upgrades, and upkeep – so that other RVers can follow along and care for their own rigs similarly. But we’re not vacationing RVers. For us, RVing is a lifestyle.

We’ve been living, working, and traveling full time in a Class A motorhome for nearly two decades. And now, lo and behold, we find ourselves part of a lifestyle craze that’s sweeping the world. Cue the curtain opening on The RVers TV series!

From The Aviators to The RVers: Who is Anthony Nalli?

The RVers is the brainchild of Anthony Nalli, creator and Executive Producer The Aviators, the world’s most popular TV series on aviation.

Anthony and his wife Lisa sold their home and took to the road in an RV in 2015 with their 2 rescue dogs, Georgie and Charlie. They’d come around to the idea of RVing as part of their need to travel with lots of gear for filming episodes of The Avitators.

Seeing the explosion in RV living around them gave Anthony all the inspiration he needed to put his producing and directing skills to work on a new television series dedicated to the RV lifestyle. The RVers has quickly become a hit.

What Makes “The RVers” So Popular?

The RVers is a big hit with RV enthusiasts all over the world as it focuses on every aspect of RVing, from what to consider when buying an RV, to driving it, to practical tips on boondocking, to maintaining and repairing an RV.

The entire cast travels extensively, shooting for the show as we go. We all own our own rigs, of course, but international RV travel also plays a big role in the show, as cast members rent RVs when traveling in other countries. Not only can you tour those RVs by watching the show, but you can also tour those beautiful countries along with us.

For example, in Season 2 of the show, we spent a month RVing in Italy. In Season 3, you’ll see the gorgeous footage we gathered with our friends and co-hosts Tom & Cait Morton of Mortons on the Move as they spent five epic weeks RVing with us across New Zealand.

Meet the Cast of The RVers

In addition to Anthony Nalli to whom we introduced you above, cast members of The RVers include us, Peter Knize & John Sullivan of the RVgeeks, Tom & Caitlin Morton of Mortons on the Move, and Adam & Celine McLaughlin and their three sons, known as The RVers Family. 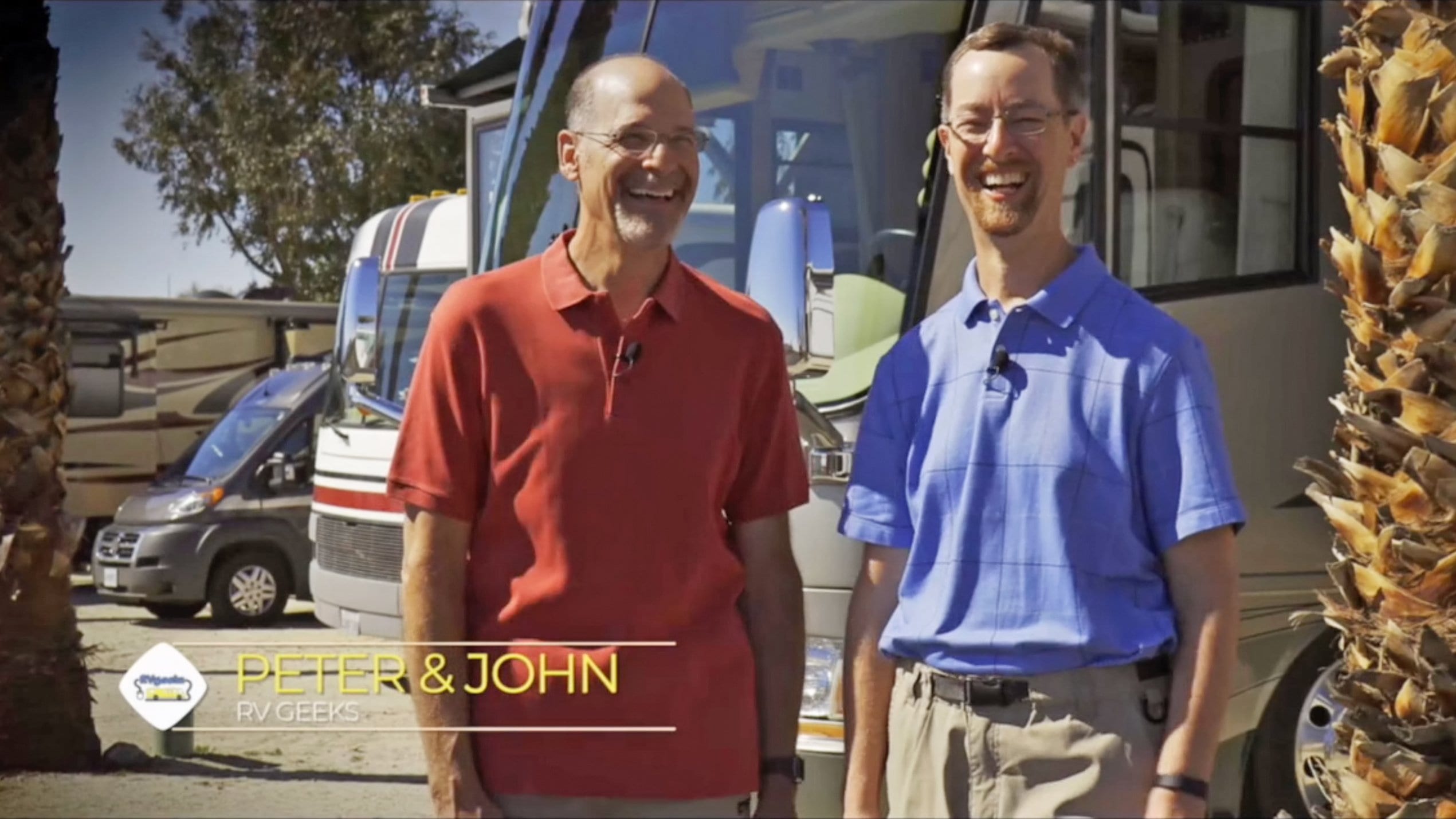 Peter Knize and John Sullivan, the RVgeeks, Co-Hosts and Co-Executive Producers of The RVers

You know us as full-time RVers for nearly 2 decades, and as hosts of the RVgeeks blog and YouTube channel. We cover all things RVing, with a special focus on DIY maintenance, repairs, and upgrades.

We’ve lived, worked, and traveled in a Class A motorhome since 2003, so we’ve encountered an array of issues to resolve and experienced many different challenges and solutions to share with the RV community.

We’re thrilled to be Co-Hosts and Co-Executive Producers of The RVers, and we’re immensely proud of its success. (And if you think Season 1 and Season 2 were great, wait ‘til you see Season 3!) 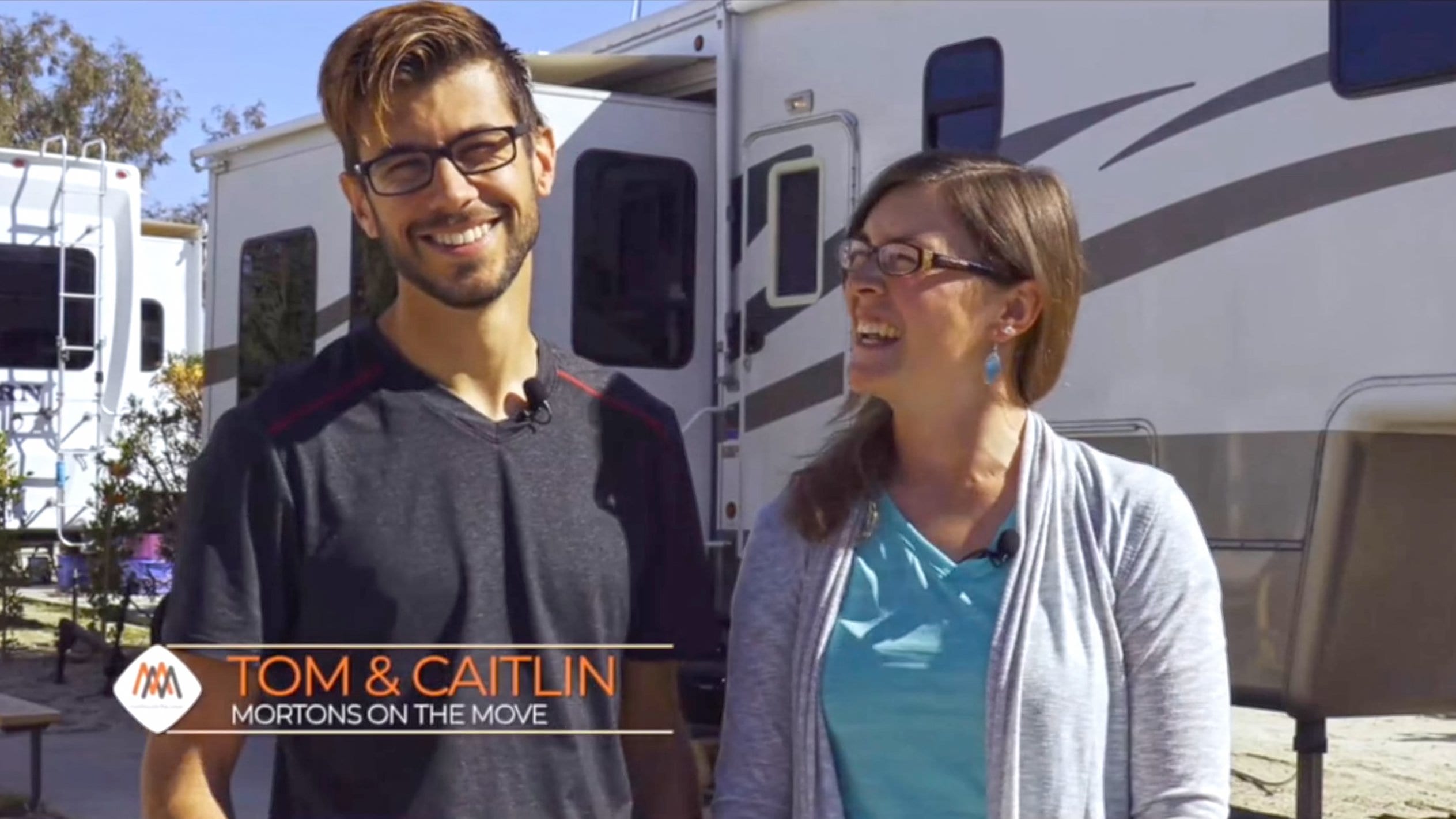 In 2015, Caitlin and Tom left their jobs and sold their home to live in an RV. In the six years since, they’ve been on the move, living and working full-time from their RV.

They’ve traveled extensively throughout the United States, including an absolutely epic trip to Alaska as depicted in their fantastic series, Go North, available on YouTube and Amazon Prime.

Tom and Caitlin have also enjoyed some magnificent RV travel outside the country, as you’ll see in Season 3 of The RVers!

Mortons on the Move’s social media:

Adam and Celine have been on the road with their three sons since August of 2018 when they decided to sell everything they owned and move their family into a renovated travel trailer.

Since then they have been running a digital marketing business from the road, and roadschooling their boys.

Adam and Celine are the online hosts of The RVers YouTube Channel.

How to Watch The RVers

You can watch The RVers on The Discovery Channel (including Discovery GO the day after airing & on-demand), PBS (check your local PBS station here), iTunes/AppleTV, Amazon Video, Fun Roads TV, Google Play, the Microsoft Store, and YouTubeTV. The RVers is also available internationally on the Wild Network in Canada, and iTunes in English-speaking countries such as Canada, the U.K., and Australia.

If you’d like a little more information about each episode, check out the episode guide.

What’s Next for The RVers?

Brand new Season 4 episodes of The RVers will premiere on the Discovery Channel (in the US) on Saturday, May 14th, 2022 at 8 am Eastern & Pacific, 7 am Central, and 9 am Mountain Time.

Check out the teaser for the new season here:

If you’d like to catch a couple of segments of The RVers for free, head over to the show’s YouTube channel where you’ll find Peter teaching Cait to drive a big rig in the Season 1 pilot here, and in Episode 2 here. You can also watch a profile about us in one of the show’s “On the Road” features here.

To check out all of the show’s social media content, head to:

Join our newsletter to learn about all things RV-related. Every week we offer free tips, tricks, product reviews, and more to our online community of RVers. Whether this is your first time on the road or you’re a seasoned expert, we’d love for you to geek out with us!

TODAY! Download Season 2, Episode 1 of The RVers FREE on iTunes/AppleTV!

FREE TODAY! Download Season 2 Episode 1 of The RVers! The COMMERCIAL-FREE streaming version of the show with added bonus content premieres TODAY on iTunes/AppleTV. We’ve had an overwhelmingly positive reponse to the show all...

https://youtu.be/t__yi88G5DY?rel=0&showinfo=0&autohide=1 The RVers Season 2 Premiere on 5/16 on Discovery features show creator Anthony Nalli and Xscapers founders Travis & Melanie Carr. Today’s video is us taping that show in front of a live studio audience at the Xscapers Annual...

Join Us As We’re Interviewed Live. Bring Your Questions, too!

Join us live on Wed, 4/15/20 at 8PM Eastern / 5PM Pacific as we’re interviewed by Adam from The RVers Family. We’ll be taking your questions live on the air about Solar, Boondocking, and The RVers...

We’re Back On The Discovery Channel!

Hi All! We’re still in New Zealand, but hoping to be on a rescheduled flight soon. In the meantime, we wanted to alert you to our imminent return to The Discovery Channel! Season One of...

https://youtu.be/KOfV6GxXKYg?rel=0&showinfo=0&autohide=1 After The RVers big Discovery Channel premiere yesterday, today is just as exciting! The show, with additional BONUS CONTENT and NO COMMERCIALS, was just released on AppleTV for FREE! That’s right… today, Monday, November...

The RVers Countdown: Where, When & How to Watch

We’re now just ONE WEEK AWAY from the premiere of The RVers on The Discovery Channel! After more than a year in the works, we’re pinching ourselves, trying to envision how it will feel when...

We’re excited to announce that we’ve added an additional personal appearance in conjunction with our new TV show, The RVers! This one will be a Watch Party for the premiere of the show on November...

The RVers TV Show Update – Discovery Has Moved Up Our Premiere!

We’re currently RVing across Italy with our friends Heath & Alyssa and their 4+-month-old daughter Ellie. While we’re away, there’s been an important update about our upcoming TV show, The RVers. Originally scheduled to premiere on Saturday...

Announcing Season TWO of The RVers!!

You read that right! Four Points Television has just announced that the SECOND SEASON of The RVers has been picked up by The Discovery Channel… before the first episode of Season One has even aired! We’ve...

https://youtu.be/5n_My1lH42I?rel=0&showinfo=0&autohide=1 The new TV series The RVers premieres on The Discovery Channel on Saturday morning, November 23, 2019 with yours truly, Peter & John, co-hosting! We’ll also be on PBS, iTunes and lots of other...

https://youtu.be/6HDLqICuJP0?rel=0&showinfo=0&autohide=1 After our recent show announcements, this MAJOR UPDATE warrants its own video… and a trip to the frozen North to share it! This is the biggest news about our TV show, The RVers, since the...

Updates On Our TV Show — The RVers! We’re Coming To PBS this Fall!

https://youtu.be/FyBzFxv-OC0?rel=0&showinfo=0&autohide=1 You may recall that we posted here late last year that we would be co-hosting a new TV show about RVing called The RVers. This video shares the latest updates, and is also our...

We’re excited to be sharing the breaking news with you that the producer of the upcoming TV series, The RVers, has just press released the official announcement of the show. And guess who will be...