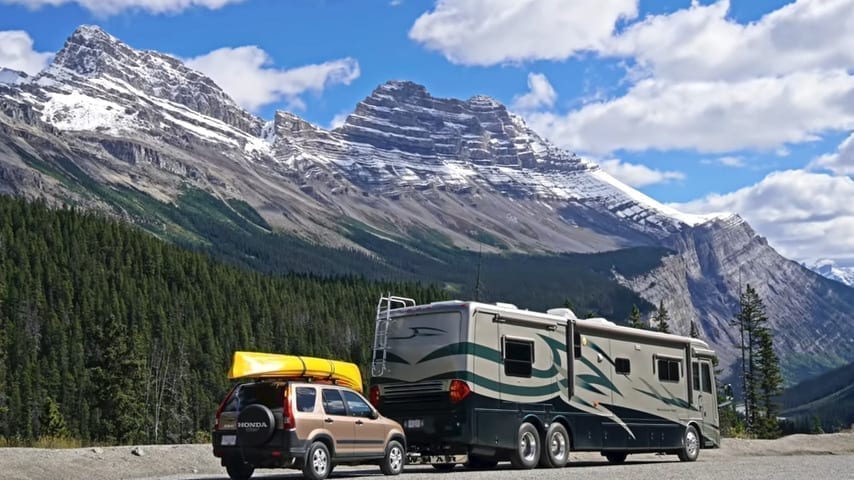 What is a Class A RV?

Motorhomes come in many different sizes, with the Class A RV being the biggest of the bunch. These self-contained big rigs are loaded with features that allow you to travel in comfort and style. They’re so well-appointed that many people choose to live in them full time, as we do!

In the broader camping community, there’s been a general trend toward RVs that are smaller and lighter. But the Class A RV’s ongoing popularity is proof that there are still many RV’ers among us whose travel style and lifestyle welcome the big brother of RVs. Read on to learn more about what makes the Class A RV a compelling choice for some of us!

What Exactly is a Class A RV?

Class A motorhomes may not be the biggest vehicles on the road, but they loom over many other RVs at campsites. These big coaches are typically built on a heavy-duty frame like commercial trucks and buses are. In fact, some Class A RVs look like the custom tour buses that carry rock stars from gig to gig!

Class A RVs run on either gasoline or diesel fuel, and they often have spacious sleeping quarters and plenty of lounging space. Depending on floorplan, they’re usually designed to sleep two people comfortably in a private bedroom, with guest accommodations most often out in the living area. There are bunk bed options available for those who want to accommodate additional travelers.

You can also expect to find well-equipped kitchens in a Class A, often with full-size appliances including a residential refrigerator-freezer with ice maker, and even a dishwasher. Larger rigs are often equipped with a washing machine and separate dryer. Many have upscale, sometimes quite lavish, bathrooms. Or even more than one bathroom, with bath-and-a-half floorplans being quite popular.

They are highly customizable, and the wide range of Class A RVs that are available is pretty amazing. We’ve seen some that are decked out in incredible detail to reflect the personalities of their owners.

Types of Class A Motorhomes

As we already mentioned, some Class A RVs run on gasoline, while others are fueled with diesel. They have slightly different designs, so let’s take a look at the pros and cons of each.

Class A motorhomes that run on gasoline generally cost less up front, and may be somewhat more convenient at times because every gas station has gasoline, while not every station offers diesel fuel.

Gas engines are generally quieter and they accelerate faster than their diesel counterparts, but that may not always hold true in the RV world, especially with turbochargers and very high torque ratings often found on diesel motorhomes.

Because gas-powered Class A RVs have their engine mounted at the front, you’ll hear more engine noise when driving or riding as a passenger. And, with the engine occupying the front of the RV, it’s not uncommon for the onboard generator to be mounted near the rear, often near/under the bedroom… which can be a consideration if you have a need to run the generator when you want to be asleep.

When it comes to maintaining them, gas Class A RVs typically have lower costs than diesels. And mechanics for gas engines are more common and easier to find, with the labor and parts generally being cheaper as well.

Diesel-powered Class A RVs like ours are called “diesel pushers” because the diesel engine is in the back rather than in the front. The engine pushes the vehicle rather than pulling it. As a result, they tend to ride quieter than their gas counterparts, since the rumble from the diesel motor is far behind you as you’re going down the road.

The generator is also placed in front, where the gas engine would be, so it’s further from the sleeping quarters in the rear. Not that running the generator all night is common, but someone with sleep apnea, or requiring air conditioning all night when power isn’t available, might need to.

Another consideration is torque. A diesel engine provides more power, which can translate into higher cargo-carrying and towing capacities. But it is also a factor when it comes to climbing mountains, with diesel-powered motorhomes having an advantage in maintaining speed up steeper slopes.

That advantage can carry through to the downhill portion of mountain driving. Diesel motorhomes often come equipped with engine brakes, which significantly improve the stopping power the engine can provide when going downhill.

The smoothness of the ride is another area where diesel pushers excel. That’s mostly due to the fact that their suspensions are supported by airbags, which help to prevent the harshness of the road from being transmitted into the body of the RV.

Maintenance costs for diesel engines can also be higher. Part of that is due to the increased volume of fluids that accompanies a bigger engine. But another aspect of it can be the challenge of accessing the engine in the rear.

Owners of Class A RVs need to develop some sound driving and parking skills. It takes a little practice to move them in and out of tight spaces in particular since they’re typically between 26 feet and 45 feet in length, with many of them in the 35-40 foot range.

That length can be a factor in two ways: because of off-tracking (where the rear wheels don’t follow the same path as the front) and rear overhang swing (the section of motorhome that extends behind the rear drive wheels swings out in the opposite direction of your turn, posing a risk to vehicles/objects that are close on that side).

Watch our video about off-tracking and rear overhang for a more detailed explanation of both phenomena.

If you’d like to watch Peter teach our friend Cait Morton how to drive a Class A RV (ours!) for the first time, check out Season 1, Episodes 1 & 2 of The RVers, now available on iTunes/Apple TV, Amazon Video, Google Play, and other streaming outlets.

How Much Do Class A RVs Weigh?

The heavy materials that go into the construction of a Class A RV, and all the amenities they offer in terms of appliances, furniture, large tanks, and generators, etc. are evident at the scales! Class A RVs are not only among the biggest; they’re among the heaviest as well.

How Much Do Class A RVs Cost?

Many variables impact the cost of a Class A RV including size, which floor plan and options you choose, and the level of luxury you desire.

We’ve seen some reports that say you should expect to pay $50,000 and up for a Class A motorhome, but we’d put the starting figure slightly higher than that. It’s probably safer to say that for a new Class A RV you should anticipate paying at least $75,000-$100,000.

Prices for large diesel luxury motorhomes can get much higher, of course. It’s not uncommon to see sticker prices of $200,000, $300,000 and $400,000. Some of the highest-end diesel pushers can even soar to seven figures.

Unfortunately, this is where this particular class finishes last. With a gas-powered Class A motorhome, you can expect a mileage of around 6 to 10 miles per gallon. With a diesel Class A, mileage will be a little better, at somewhere around 7 to 12 mpg.

In general, the smaller the motorhome, the better the gas mileage. Class C RVs perform better than Class A’s in terms of miles per gallon. Many Class B’s (camper vans) do even better.

Benefits of Class A RVs

Some Class A RV owners describe the feeling of traveling down the highway as being like riding on a cloud. With the large windows all around, you get a great, panoramic view, as well!

There’s also a sense of freedom in being able to easily move from driving… to enjoying all of the amenities in your RV without having to get out of one and into the other. That makes a rest stop that much easier.

Class A RVs also have huge tanks, so you won’t have to fill up as frequently. Fuel capacity for a Class A RV can range from 80 to 200 gallons.

Fresh water and wastewater tanks can also be very large, so you can boondock (camp without hookups) for longer periods if you want to.

Most of the newer models of Class A motorhomes have automatic leveling systems which are a great benefit and a significant improvement in ease-of-use and stability over the stabilizing jacks found on smaller RVs.

Disadvantages of Class A RVs

The high cost to purchase a Class A motorhome is clearly a disadvantage, and unfortunately, maintenance costs tend to be higher as well.

They also have a huge footprint. Many of these mighty beasts are surprisingly nimble, but most have a fairly large turning radius, and of course require large campsites.

Driving a Class A RV, especially a diesel pusher, is like driving a bus, so you may find them to be comparatively cumbersome, no matter how well you develop your skills. You may also be towing a secondary vehicle which not only adds to your length but also presents another expense.

Gas mileage of the Class A rigs is another disadvantage, as is the fact that they tend to depreciate rather quickly.

There’s no doubt that Class A RVs are a first-class way to travel and camp.

For campers who enjoy a more minimalist experience and a smaller footprint, they may be too much to handle. For others (like us!), they’re home on wheels, and we wouldn’t trade them for any other home in the world.

Join our newsletter to learn about all things RV-related. Every week we offer free tips, tricks, product reviews, and more to our online community of RVers. Whether this is your first time on the road or you’re a seasoned expert, we’d love for you to geek out with us!

We sometimes receive products for evaluation at no cost, and The RVgeeks are a participant in the Amazon Services LLC Associates Program, an affiliate advertising program designed to provide a means for us to earn fees by linking to Amazon.com and affiliated sites. But our opinions are our own, you won’t pay an extra penny, and we only link to products we personally use, love and can recommend to friends with complete confidence.
— Previous article

Everything You Need to Know About RV Window Awnings

Read More
There’s a school of thought that suggests that RVing and camping are expensive. The folks who subscribe to…
Read More

Read More
One of the first decisions often made when buying an RV is “New?” or “Used?” While some people…
Read More

Read More
If you saw our video about installing a cellular booster earlier this year, you know how much we value…
Read More

Read More
As we’re exploring England in our rented motorhome, we’re particularly fascinated by the canals and locks that criss-cross…
Read More