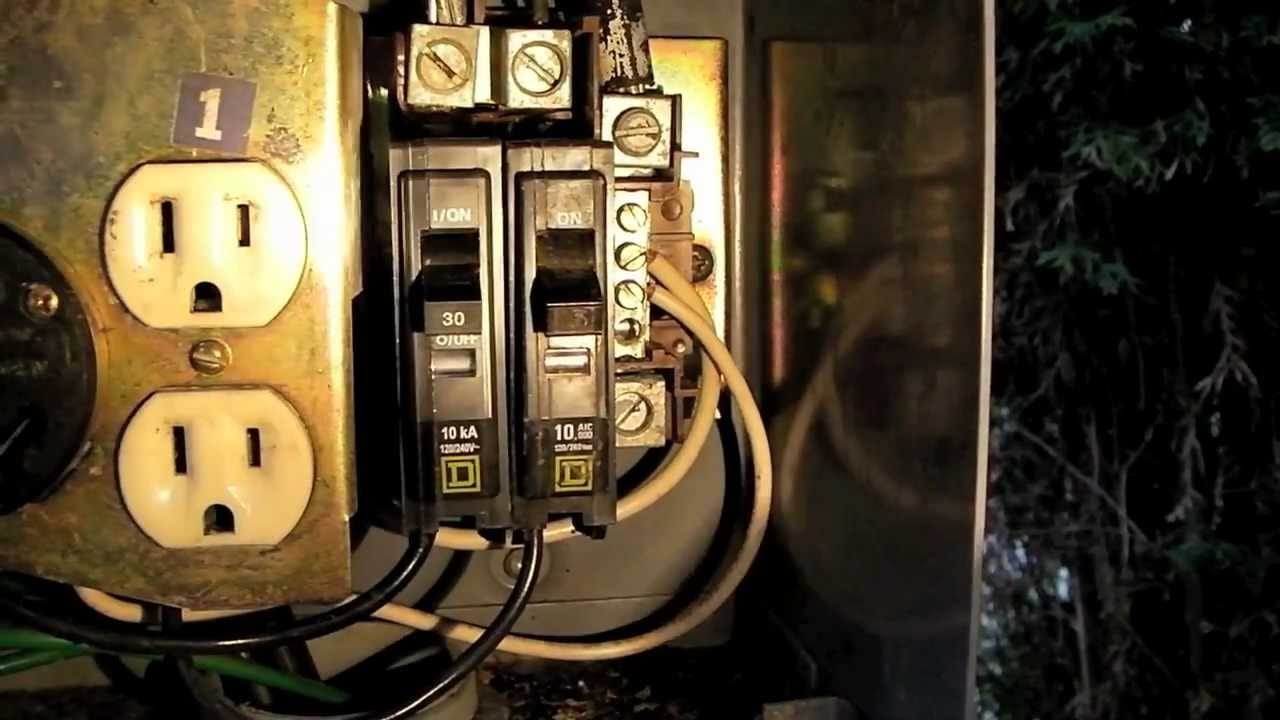 Replacing a Circuit Breaker on an RV Power Pedestal


WARNING: IF YOU’RE UNSURE ABOUT WORKING WITH ELECTRICITY, CALL A PROFESSIONAL.

Although this video is about replacing an RV park circuit breaker, the concept is the same as the breakers inside an RV.

Replacing a circuit breaker on an RV power pedestal is not something that the vast majority of RVers will ever need to do, especially in a typical RV park. But the park where we’re spending the winter does not rent sites. Instead, every lot in the park is privately owned, and, as with most private property, each owner is responsible for maintenance on their lot, including the utility connections.

We’re staying on a friend’s site, so when the 30-amp circuit breaker failed, we wanted to save them the cost of hiring an electrician, so we did the quick, easy repair ourselves.

Here’s how we knew we had a problem…

We only have two 110-volt lights in the entire RV (a desk lamp that came with the RV from Newmar, and the light built into the microwave). All of the other lights are 12-volt. Over the past week or so, we noticed that when we had either of the 110-volt lights on, they would occasionally flicker momentarily. When we checked our voltmeter, which is always plugged in, the needle would periodically “blip” down to the bottom of the scale for an instant, as though the power was cutting out for a second. Of course, the needle dropping out on the voltmeter was coinciding with the lights flickering.

Then one night, we used the microwave over. Within a few seconds, the power draw (even with nothing else pulling any real draw turned on) was too much for the system, and our Intellitec Smart EMS (Energy Management System) said “Sorry Charlie…. not enough power for that” and shut down our power. This stopped the microwave, allowing the power to quickly come back on.

We’re in a very remote area, and the power in the park is not the most robust, but we had never had a problem like this before. The occasional power outage? Sure. Low voltage when under somewhat heavy load? Yup. But it had never dropped out suddenly or altogether.

This smelled (strictly figuratively speaking) like either a loose connection in the power pedestal, or (more likely) a worn out 30-amp circuit breaker. We tried re-setting the circuit breaker at the pedestal, but it tended to spring back to the middle (tripped) position, making us virtually certain that the spring was bad, and the breaker had outlived its useful life.

We then attached our 30-to-20-amp dog-bone (adapter) to our main power plug, and tried plugging into the 20-amp circuit on the pedestal (which clicked on and off with the proper “thud” of a healthy breaker). Sure enough, no more flickering… and the microwave even worked fine.

We removed the breaker and took it down to our local home/hardware store, and were back in business for less than $20. Sure beats the cost of an electrician. :) This video demonstrates the process of removing and replacing a circuit breaker. Every brand and type is a little different, but this will give you the basics that apply across most types.

0 Comments
Inline Feedbacks
View all comments
Sometimes we receive products for evaluation at no cost and may use affiliate links to the products and services from which we earn commissions. For example, as an Amazon Associate, we earn from qualifying purchases. That said, it's important to us to let you know that our opinions are our own. We only recommend products we believe deliver real value and that we can confidently recommend without reservation. You also won’t pay an extra penny by using our links. Thanks so much for supporting RVgeeks as we work to create helpful RVing-related content that we hope enhances your RVing life!

How To Calibrate RV Tank Monitors

Read More
RV boondocking, solar panels, and lithium batteries are huge topics. But what if your solar panels are blocked…
Read More

Read More
If you’ve ever found yourself asking the question, “Why does my RV battery keep dying?”, then this post…
Read More

Read More
An RV power converter may be one of those things we rarely think about, but without a working…
Read More

Read More
As we head into the season when many (but not all!) RVers store their rigs for the winter,…
Read More

Read More
We demonstrate how to properly service, maintain and equalize the 6-volt deep-cycle golf cart batteries in an…
Read More