Fuel is one of the most significant expenses for RVers, and every nickel counts when you’re filling large fuel tanks and traveling frequently. But as we noted in our recent post about gas prices affecting RVers’ travel plans, there are several ways to offset the high cost of fuel without giving up your plans to hit the road. Today we’re looking at whether Costco gas prices might offer another way to save some dough when fueling up, and if so, just how much cash you can save at Costco pumps. And are there any drawbacks to fueling up your rig at a Costco?

Do All Costco Locations Have Gas Stations?

No. Not all Costco locations offer a fueling station, but there are many that do.

As we write this post, there are 574 Costco locations in the United States and Puerto Rico, 22% of which are in the State of California (132 locations). They also have over 100 locations in Canada, as well as additional locations in 10 other countries. Costco continues to expand, so these stats can change quickly. With well over 800 warehouses (total) worldwide, Costco is the sixth-largest retailer in the world.

You can search for the Costco nearest to you here. When you find a Costco near you or near where you’ll be traveling, an icon of a gas pump will identify whether or not that particular Costco location offers a fueling station.

When you look up the Costco near you, if that warehouse has a gas station, you’ll see this gas station icon noting its presence at that location.

And if you don’t have a Costco with a fueling station near you, check out our post on the 5 best apps to find cheap gas wherever you are.

Can Anyone Buy Fuel at a Costco Gas Station?

No. As with all things Costco, you have to be a Costco member to buy fuel at a Costco fueling station, although an individual state may prohibit that practice.

We know first-hand that anyone can buy gas at Costco locations in New Jersey. In 2004, it was ruled that Costco’s requirement that people who want to buy gas must pay a membership fee violated New Jersey laws regarding fuel sales.

Besides New Jersey (and possibly other states?), there is one other exception, as stated on the Costco Website: “Costco Shop Card customers do not need to be Costco members.” As the Shop Card is Costco’s gift card, having one allows a non-member to fuel up. You’ll just need to have a member buy one for you.

If you’re a Costco member and you arrive at the pump only to realize that you don’t have your membership card with you, don’t despair! Take a look at your pump number and head over to the attendant booth. They’ll be able to locate your account and if your membership is active they’ll authorize the pump for you and you can fill ‘er up!

Using a Costco Shop card of course does not require inserting a membership card (since you may or may not have one). Costco attendants are great, and can help if needed!

How Much Does a Costco Membership Cost?

Costco offers a few different memberships. The traditional “Gold Star” membership costs $60 a year as does the business membership.

Where Does Costco Get Its Fuel?

Costco notes that the company buys the fuel it sells from major refineries and distributors in each area. But here’s what you need to know for your own peace of mind:

All Kirkland Signature™ Fuel is guaranteed like all of the merchandise you’ll find in Costco warehouses.

Also, since August of 2017, Kirkland Signature™ Diesel has been certified to meet the Top Tier performance standards. You’ll find more on that certification here.

Is it Cheaper to Buy Gas from Costco?

In many states, Costco gas prices are the least expensive gas of any fueling station throughout the state. Costco is generally one of the cheapest places to fuel up.

With that said, how much cheaper Costco fuel is than its competitors varies by location and even by the day. But in some areas, you’ll save as much as 30 cents per gallon by fueling up at Costco rather than at a neighboring station.

Can You Buy Diesel Fuel at Costco? 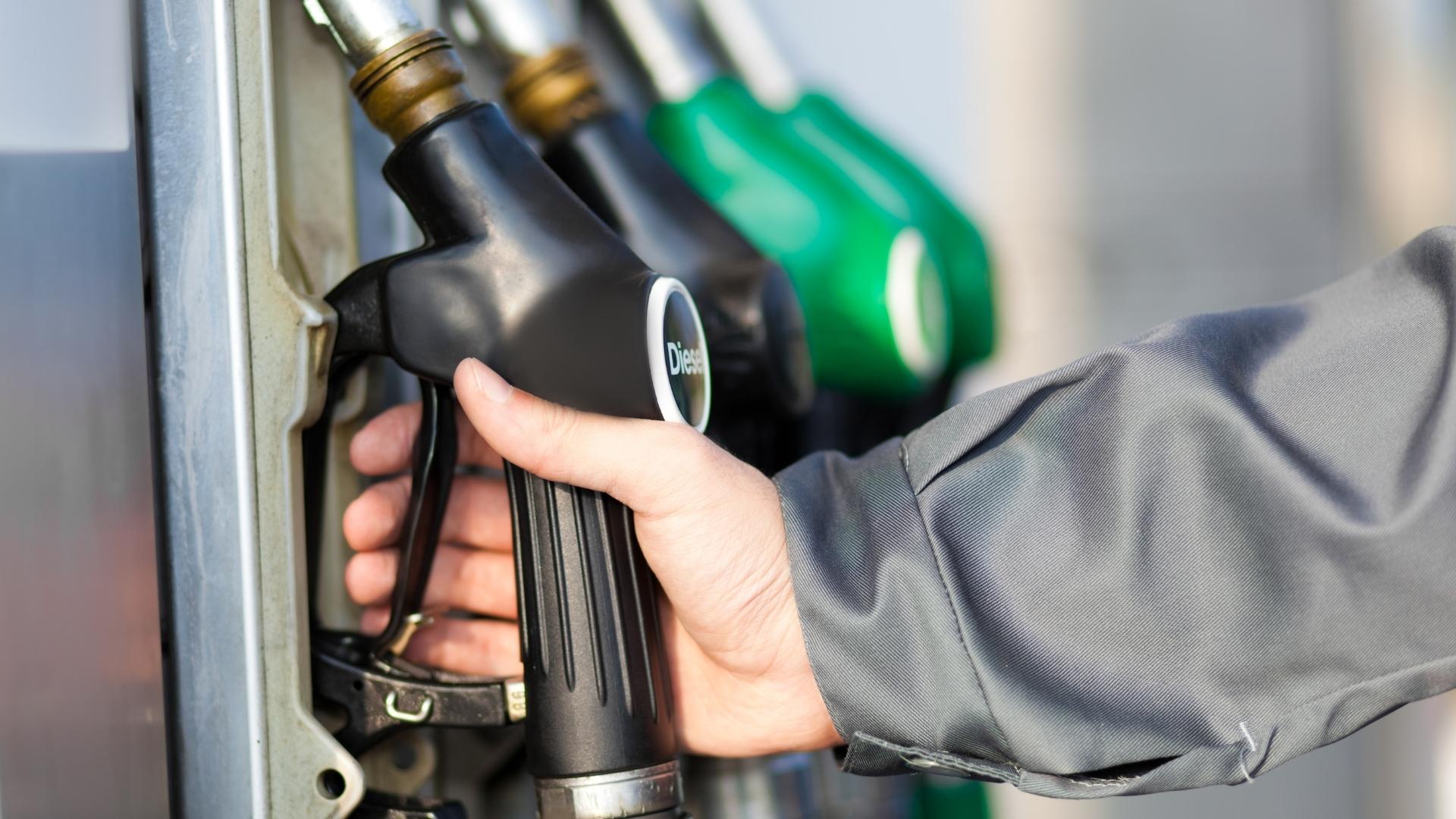 Some Costco fueling stations carry diesel fuel but the majority do not. It’s wise to call ahead to find out prior to pulling your rig into the waiting line.

Since Costco gas prices are often the cheapest, it’s good to know that some locations carry diesel, too. As we noted above, Kirkland Signature™ Diesel has been certified to meet the Top Tier performance standards since August of 2017. Unfortunately, the majority of Costco gas stations don’t carry diesel. But we always make note of those that do!

Is There a Downside to Buying Fuel at Costco?

If there’s a downside to buying fuel at Costco (other than needing to be a Costco member which we certainly don’t see as a downside at all), it’s the fact that Costco’s low prices aren’t a secret! As a result, there are often long lines, particularly at certain times of the day.

Along the same lines (crowded stations), it may be difficult, especially at smaller locations, to maneuver an RV up to the pumps. When we’ve identified a Costco with diesel fuel, we check out both the Google Satellite View and Street View to scope the situation. That gives us a good idea of what the access is like, and whether or not we’ll be able to fit in with our RV and take advantage of the cheap Costco gas prices!

With Peter’s background as a tour bus operator and instructor, and Safety & Training Manager of a major bus company (operating in New York City no less!), we generally have an advantage when it comes to navigating tight locations. Be sure to stay within your own comfort zone.

It’s best to schedule your trip to a Costco fueling station during off-peak hours, especially early afternoons, mid-week. Although with the price of fuel these days, and Costco’s competitive prices, it can be crowded just about any time.

Your best bet to beat the crowds is likely by going in the early morning hours when the gas station is open but the warehouse is not. This can be particularly advantageous to RVers. Fuel up, park your rig at the warehouse, and have some breakfast on board while waiting for the store to open. Then stock up on groceries!

Do You Fuel Up at Costco?

So, tell us – do you fill ‘er up at Costco? If so, what advantages and/or disadvantages have you experienced? Have you found Costco’s fuel prices to be significantly lower where you fuel up? Leave a comment below and let us know!

Subscribe to our newsletters to learn about all things RV-related. Every week we offer free tips, tricks, product reviews, and more to our online community of RVers. So, whether this is your first time on the road or you’re a seasoned expert, we’d love for you to geek out with us!

If you have a larger rig, you might want to scope out the parking lot and station layout on the satellite view of Google Maps/Earth first to verify that you will be able to navigate in and out of the pump area with adequate clearance. Some can be challenging.

Costco is great but if we're in Texas we prefer Buccee's. Not only is the gas price as low as Costco but you can grab a tasty brisket sandwich and a giant unsweet ice tea.

The Costco visa gives a 4% discount even on fuel purchases at non-Costco stations (up to $7000 in purchases) - when we do the numbers, that’s a pretty good discount to compare with some of the fuel programs. Beware too that some older motors like our 2002 Cummins don’t like bio diesel.

As hard as I try my 36’ class A rig takes up two pumps at Costco. Not to bad when I fill up the tow car but…. My last trip to Costco a woman tried to squeeze between me and the car in pump #1. She got all sorts of ticked off that I had pulled so far forward. Costco attendants interceded and apologized for her behavior. LOL. Mark A.

We hear you, Mark. When fueling our 43' diesel pusher... we definitely prefer it if the station is relatively quiet (almost impossible these days) since we can take up one whole side of a fueling island. Haven't had any instances of people getting mad and/or trying to cut in... but we could see it happening. Glad the attendants stepped in on your behalf! 😉

We've used Costco for decades. Getting our 24' Cougar 2 yrs ago & full timing we had to learn some new things. @ Costco & many other locations we pull into the 1st pump. As DW pumps I go behind the rig & guide others around us to use the mid or front pumps. A Costco attendant taught us that & it cuts down on a lot of angry faces. Then departing, I pull us forward & on occasion DW will guide the traffic behind us so I can backup & make the usual tight squeeze out. After some 40k miles in 25 states over 2 years it's a joy to find so many thankful folks appreciate those 2 aids to getting us in & out quickly.

Sounds like you've got a great system in place!